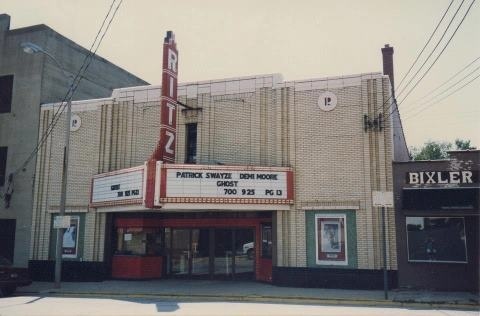 The Ritz Theatre opened on July 19, 1941. The City Attorney (Eugene Northern) presided over the Ritz Theatres' formal opening. The opening days advertisements exploited the Western Electric Sound in a theatre that was “air conditioned by refrigeration”. The first manager of the Ritz Theatre was Mrs. Mildred Karsch.

In the early days of the Ritz Theatre it was advertised as “the deluxe theatre”. When the new Uptown Theatre opened five months later, advertisements for the Ritz changed to “still – the best of everything at the lowest admission”. Other Ritz advertisements - “Go to the Ritz, everybody’s doing it”. and “Always 70 degree cool”.

In its early days the Ritz Theatre was an independent operation that fought off the chain theatres that sprouted up all around it, but it, too eventually became part of a chain.

After closing in 1995, the Ritz Theatre sat empty for three years before being demolished.

The Ritz was left unlocked shortly before demolition, and I couldn’t resist taking a flashlight in and looking around. The seats and screen had been pretty well worked over by vandals. While one of the restrooms was wrecked, the other had apparently been kept viable by workmen doing pre-demolition salvage—it was in decent shape, stocked with paper towels and soap. In the balcony I found a homemade Superman costume neatly folded up inside a plastic bag.

A while after the Ritz was knocked down, I looked up the Rolla newspaper from the demolition date. While there were several photos and a detailed history on the adjacent car dealership that was also demolished, no mention was made of the Ritz.

Boxoffice, Jan. 5, 1952: “The Lyric (in Newburg MO) for many years was operated by Mildred Rauth of Rolla, Mo., who still has the State Theatre at Cabool and the Crocker at Crocker, Mo. Several weeks ago she sold her Ritz Theatre at Rolla to R. E. Carney.”

I wonder if the July 3, 1941 issue of Film Daily got Mildred Rauth’s surname wrong, or if she remarried sometime before selling the Ritz to R. E. Carney?: “MRS. MILDRED KARSCH, following a business visit to St. Louis, has returned to Farmington, Mo., and will open her new theater in Rolla, Mo., on July 15.”