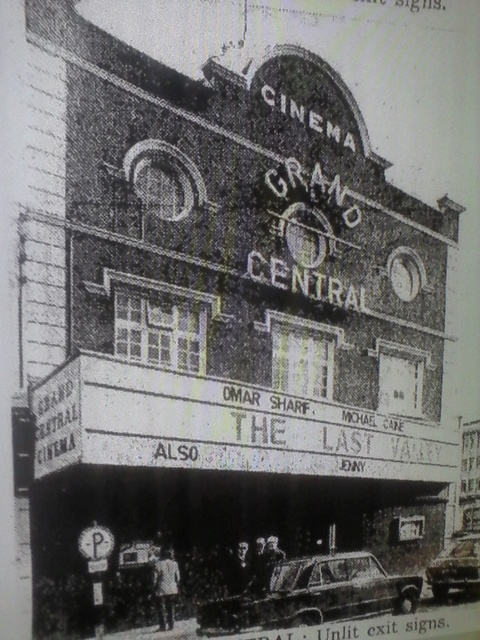 Located in Limerick, County Limerick. The Grand Central Cinema was opened in November 1922 in a conversion of a 1821-built Methodist church. It had a 25ft wide proscenium. It was equipped around 1929 with a RCA sound system, which was later replaced by a Western Electric(WE) sound system.

The Grand Central Cinema was closed at the of October 1973 The stall area was converted into retail use and the former circle upstairs re-opened as the 200-seat Central Studio. This closed in 1990. In August 1922 it was taken over as an extra screen for the Savoy multiplex actoss the road and was finally closed in 2004.

The Grand Central opened in November 1922 and was based in former Wesleyan Methodist Church of 1821 previously known as the Independent Chapel and later the Central Hall. The owner Paul Bernard had a new façade added in front of the old one. It closed at the end of October 1973 and the downstairs became shops, but the cinema reopened on the first floor as the 200-seat Central Studio the following April screening Day of the Jackal. It closed in 1990 following the opening of the new five-screen Savoy complex, but was reopened in August 1992 by the Savoy who stated that it was their “sixth” screen being across the road from their own building. It eventually closed in 2004 and the frontage was knocked down in 2007 for a new shopping development revealing the old church façade behind, which has been retained. Architectural buffs can see more building information at: http://www.buildingsofireland.ie/niah/search.jsp?type=record&county=LI&regno=21512004