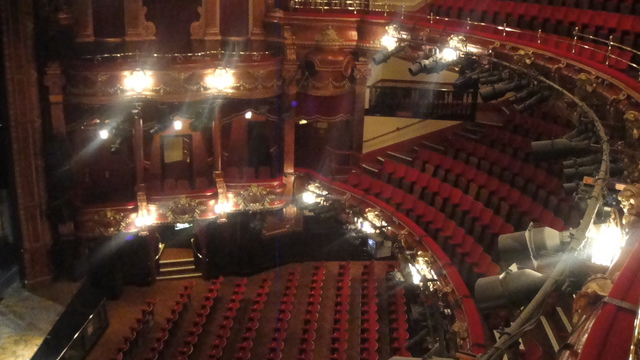 It was designed by noted theatre architect Frank Matcham, and was opened on 6th November 1911 as a music hall under the direction of Alfred Butt. The opening programme included music hall acts and Lizzy Glenroy, Betty Barclay, Herbert Sleath & Company in a one act play “The Deputy Sheriff”. The building has a white terra-cotta tiled façade, which has Classical statues and a tower which had gilded metal statue of Russian ballerina Pavlova mounted on top (this was removed during World War II, and has been replaced by a copy of the original in recent years).

Seating inside the auditorium is provided for 713 in the orchestra stalls, 413 in the dress circle, 415 in the upper circle, with six boxes on each side of the proscenium having 24 seats. The proscenium is 35ft wide, and the stage is 25ft deep. There are 15 dressing rooms. The orchestra pit can accommodate 14 musicians. The theatre was equipped to show films which were part of the music hall programme, and the purpose built projection box was located at the rear of the upper circle. The Victoria Palace Theatre was listed in Kinematograph Yearbooks up to 1947. There was a tea room for the convenience of patrons, as well as bars on all levels.

The Victoria Palace Theatre operated as a music hall until 1929, when Revues became popular and Gracie Fields starred in “The Show’s the Thing”. In September 1934 the melodrama “This England” was produced on stage, which became a cult hit. On 16th December 1937 the musical “Me and My Girl” began a run of 1,046 performances. From 17th April 1947 The Crazy Gang became a permanent feature of a series of 6 productions at the theatre, which ended their run on 19th May 1962. “The Black and White Minstral Show” followed and ran for the next 10 years, closing in November 1972 after 4,344 performances.

Recent years have brought hit shows such as: “Annie”, Elizabeth Taylor in “The Little Foxes”, Cyd Charisse in “Charlie Girl”, Michael Crawford in “Barnum”, the hit musical “Buddy” about Buddy Holly played from 1989 to 1995. This was followed by Brian Connley in “Jolson”. In 2000, the musical “Fame had a successful run followed by a revival of "Kiss Me Kate”. In 2005, Elton John’s musical “Billy Elliot” began a long run, which ended on 9th April 2016.

The Victoria Palace Theatre was closed in April 2016 for refurbishment and renovation, which included an extension of the stage. It re-opened on 21st December 2017 with the musical “Hamilton”.

The Victoria Palace Theatre is a Grade II Listed building.

Well with Cameron Mackintosh running the Theatre we can be assured that He will do a good job of the restoration.. I remember “The Crazy Gang Shows” Brilliant..

Some photos of the theatre:–

AUDITORIUM TO STAGE in 2015

AUDITORIUM FROM STAGE in 2015