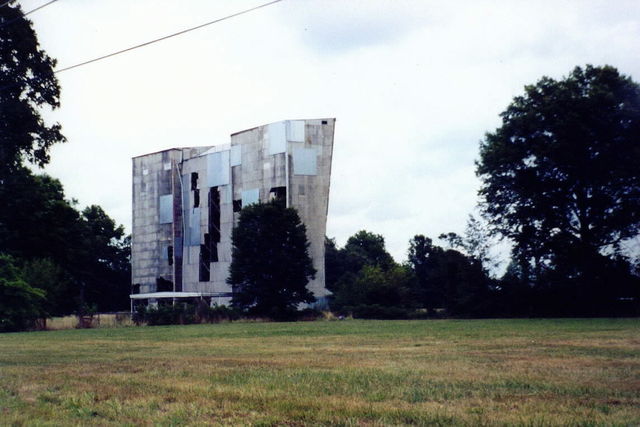 The Egyptian Drive-In opened on August 21, 1948 with Cornel Wilde in “The Homestretch” & Basil Rathbone in “The Black Cat”. Located in the small community of Energy, just outside of Herrin, in Illinois' Egypt region. It was built by Wayne and Alene Smith, and originally could accommodate about 400 cars (though parking was later increased to over 650). In 1955, the Smiths increased the size of the screen to 125 feet wide by 83 feet tall, the largest in the country at the time.

In addition to movies, the Smiths offered a kiddie park that offered mini-train rides and pony rides as well as a concession stand that served cafeteria-style food, and propane heaters for when the weather turned cool.

The Egyptian Drive-In was sold to the Kerasotes Theatres chain in 1974, but in 1981, was returned to Alene Smith. Kerasotes didn’t feel the drive-in was profitable enough. In 1981, radio broadcast replaced window speakers, and a decade later, Smith opened up a restaurant on the drive-in’s property showcasing some of her culinary delights, such as her funnel cakes (“as good as any at the county fair”) and Charlie Burgers, named for a famous local outlaw. Also featured was Alene Smith’s popular alligator stew. Smith’s cooking became almost as big a draw to the Egyptian as the on-screen entertainment.

Sadly, Alene Smith passed away in early-2001, and her daughter ran the drive-in for a season or so before the nearby Williamson County Regional Airport made an offer to her, and, at the end of the 2002 season, the Egyptian Drive-In was closed for good. Later, the property was cleared to make way for the airport’s expansion.

Though the region’s most beloved drive-in is no longer around, it continues to live in the hearts and memories of generations of southern Illinoisans.

My twin and I [commonly referred to as “The Twins” or “The Rose Boys] were the brawn and dim-witted backbone that helped Alene revive the Egyptian after the abysmal tenants [Kerasotas] left the property back in the ‘81-'82 season.

The love, desire and commitment to the theater, to her good name, and to the reciprocal love and loyalty of her friends/staff [“The Rose Boys] Alene and The Egyptian saw great strides for the decade of the 80s and I proudly stand as a huge part of that.

My twin and I have extensive files, photos and stories to tell of the resurgence of Alene’s theater from [roughly] 1983 to 1989. Though a name or two may escape me, there are many stories to be told- both beautiful as well as taudry.

For the definitive information concerning the 1980s Pheonix rise of The Egyptian, feel free to contact me.

The Egyptian is now demolished but one can still discern the pattern worn into the earth of the parking configuration, clearly visible on Google Earth. It’s a crying shame that Herrin, IL lost the Annex, Marlow’s, the Riviera Drive In AND the Egyptian so long ago. The Egyptian was a gem of a drive-in theatre in its day.

Here is a June 1967 ad from the Southern Illinoisan:
http://tinyurl.com/df94cq

I am looking for photos of the Egyptian Drive In from 1955-1959.
I am especially interested in photos of the fire truck. There was a small fire truck that would carry kids around the parking lot prior to the first movie.

RusSEAL, I would like to contact you about sharing your photographs with the Herrin Community by way of the Herrin History Room at the City Library. I didn’t see a way to contact you directly, so I’m hoping you see this. I personally am not at the library often, but the assistant director of the museum is there. Her name is Lisa Carnaghie.

Does anyone live close to where the drive-in was??? My aunt was Alene Smith and she and my uncle Wayne built the theater. I would love to find some of the speakers or anything from the drive in. I lived there with Alene for several years and it was awesome in many ways. I looked on google earth and see it is all gone except the stable on the north west side where we had the riding arena. I also saw the street sign with Egyptian on it. I wonder what happened to the neon marque that was out front. Wow the memories!!!! Wonder what ever happened to Marty Franklin.
Anyway, if any one lives around there please contact me at

The Marquee is still there at the corner of Egyptian and S Park Avenue. Doesn’t say Egyptian anymore but it’s there.

There was a lengthy Associated Press article about the Egyptian and owner Alene Smith published in the July 14, 1985 issue of the Springfield IL State Journal-Register.

Smith would pick up the microphone and tell the patrons listening to the drive-in’s AM/FM feed that its screen “is the largest in the world – nine stories high and 200 feet wide”. She would also plug the “Charlie Burger” named after local gangster Charlie Birger, the last man hanged for murder in Illinois.