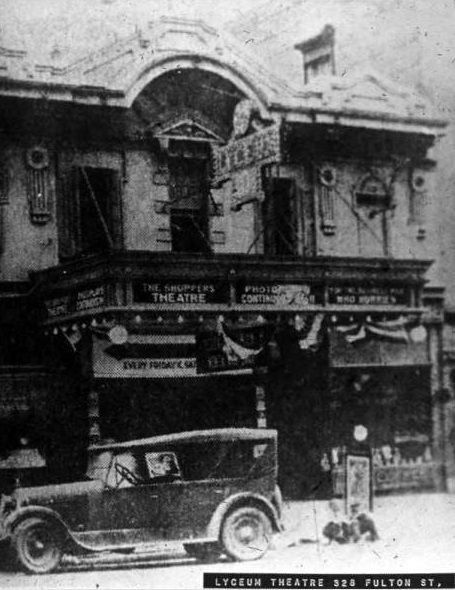 The Weast Theatre was opened prior to 1908. Alterations were made in 1911 and it reopened as the Lyceum Theatre. It was closed by 1930.

Some additional information. The Weast Theatre was already in operation prior to 1911. Around that year, the theatre was sold, remodeled and opened as the Lyceum Theatre.

The Weast Theatre was the smallest of four houses listed at Peoria in the 1908-1909 Cahn Guide. The Weast was a ground floor house with 900 seats. It had a rather small stage, only 41 feet between the side walls and 26 feet from the footlights (which were 8 feet in front of the curtain) to the back wall.

A 1922 obituary of Peter A. Weast at Find a Grave says that the Weast Theatre presented “high class vaudeville” from about 1888-1908. The page has scans of a couple of vintage ads for the house, one of which includes a sketch of the facade. Although the ad gives the address of the house as 314 Fulton it is apparently the same house, as the biography says that it was “…located where the Lyceum Theatre on Fulton is.”

If this report from the September 1, 1909, issue of Cycle and Automobile Trade Journal is correct, then the Weast Theatre ceased to be a theater for a while:

“The Thatcher-Bererstorn Co. has opened a garage in the old Weast Theatre on Fulton street, Peoria, Ill. The company handle the White steamers, Cadillac gasoline cars and Wood electrics.”

The re-conversion of the building back into a theater took place the following year, as noted in this item from the November 15, 1910, issue of The Nickelodeon:

“Peoria is to have still another new theater. The old Weast theater on Fulton street has been leased by a syndicate of Peorians headed by Sandy McGill, and will be devoted to motion pictures and vaudeville. Associated with McGill are Wiley Bracket, Chas. Nathan and Felix Greenburg, proprietor of other theaters. Greenberg is to be manager.”

The December 3, 1910, issue of The Moving Picture World said that the old Weast Theatre in Peoria had been remodeled and converted into a moving picture theatre, though it didn’t mention the new name of the house.