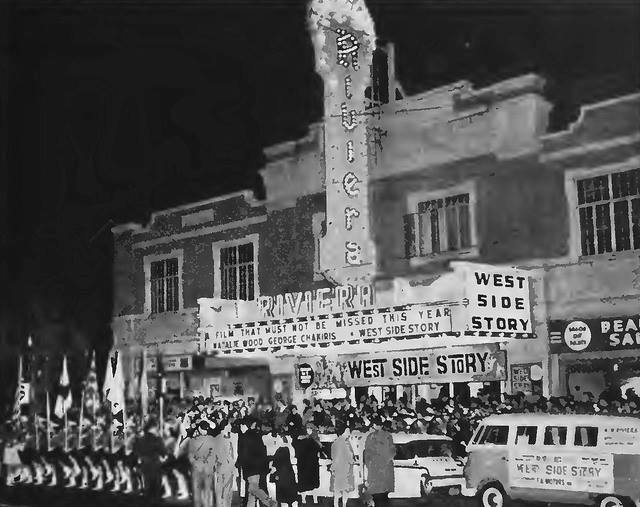 Waring is closed actually I think. Coronet is demolished I think but I can check on it.

I lived a few blocks away from the Riviera in the second half of the 1970s, from about age 7-12. I frequented the weekend matinees – various Godzilla flicks, Laserblast, Yog: Monster from Space, at least one Lassie movie, many others lost in the decades – all presented with various preview material including cartoons and serials – I remember a run of the 1941 Captain Marvel serial at one point.

Pretty sure it was a buck – or maybe 99 cents – for a kid to get a matinee ticket.

I don’t live in Rochester anymore but I still have family there. When I visit I miss seeing it there on Lake Ave – and that it was torn down & replaced with a cookie-cutter drugstore is a bummer.

I can remember going here in the very early 70’s to see Godzilla movies here on the weekend,,

The Riviera was a great theatre that showed great movies. It is sad that they are not remembered, and I recall how sad it was to see if close and later erased from the landscape. My father would take our entire family there during the 1950’s and 60’s. Our Elementary School, Holy Cross, would have special outings there as well. This is where the Sound of Music was shown, and the screen was so large that you could almost feel like you were flying over the Alps. The music was so clear and real, that it was like an orchestra playing. Other movies I recall were The Alamo with John Wayne, Ben Hur, and as you can see in the photo, West Side Story. We saw lots of movies, and I can’t remember which theatre we saw them in, but there was The King and I, Oklahoma, Flower Drum Song, Bridge on the River Kwai, (little could anyone have guessed that Alec Guinness, the star of Bridge on the River Kwai, would later star as Obi Wan Kenobi, in Star Wars. We saw all the Disney Classics, animated and movies like Old Yeller, and Swiss Family Robinson, Dumb, Pinnochio, Snow White and what seems like countless others. I see these on television now, and they bring back such great memories, of great movies, happy family times, and beautiful large theatres. My parents have passed away, the the family has all moved away, but the memories still live on, as you were not only entertained by the movies, but the beauty of the theatres; yes, they were called theatres, then, not theaters. The Riviera was nice inside, not as classy as the RKO Palace on Clinton Ave. and Mortimer St., but nice and it was clean too. East of the theatre, where Ridgeway Ave., met West Ridge Rd., there was a diner, in the shape of a Railway Car. Not that it was ever that, it just had the shape, very similar to the one at South Goodman St., and South Clinton Ave., with the shinny stainless steel exterior and the food was good. We might go there sometimes before the movie or after, for a nice treat. There was also a White Tower, on West Ridge Rd. at Lake Ave., but it was torn down to make room for Piehler Pontiac’s Used car lot. The speed limit on Lake Ave., back then was 25 mph. The price compared to now was very inexpensive, but salaries were much lower too, so at the time, it was still expensive to take a family out for an evening at the Movies. People would also dress up, for the fancier movies, and they all seemed to end with the full of the sound of applause. As I write this, I am watching, Heaven Knows Mr. Allison, which we saw as a family back in 1957, and I can still smell the fresh made popcorn.

According to a brief article about the Riviera Theatre in a document published by the Rochester Theatre Organ Society (PDF here) the house opened on Saturday, September 25, 1926. The Riviera had a 3/11 Marr & Colton organ.

I just can’t get over how many lovely theaters there were in the area, many of which, like the Riviera and Monroe were first run theaters that played 70mm stereo engagements as well as Cinerama films. I keep running into ads from the 60s that show the Monroe and Riviera showing the likes of “The Sound of Music”, “This is Cinerama”, “It’s a Mad, Mad, Mad, Mad World”, “Lawrence of Arabia”, the 70mm reissue of “Gone With the Wind”, etc. I am shocked that there aren’t more photos that exist of the theaters when they were in decent shape. I can find no more recent photos of the Riviera. When I was a teenager, both theaters were showing X rated films to survive. How ironic….