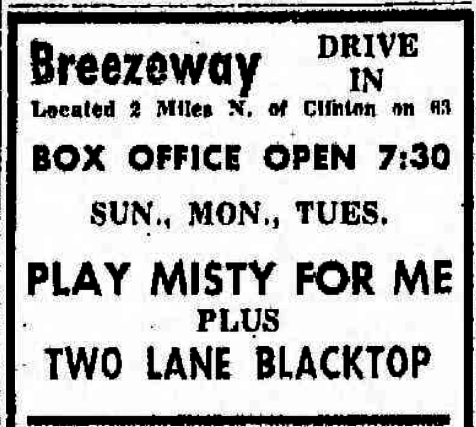 Located 3&½ miles north of Clinton in the district of Newport on State Highway 63. The Breeze Way Drive-In was opened in July 1956 and was operated by Gene Marietta & Gene Hathaway. It was closed in the 1980’s playing X-Rated movies.

The address (at least according to Google) is 11226 Indiana 63, Clinton, IN. The drive-in appears to have been demolished in the late 1980s/early 1990s. You can still see the ramps and outline fairly clearly. http://tinyurl.com/jaczk4g

HistoricAerials shows the Clinton in 1949 at 2801 N Main St., and still there in 1953 and 1955. All three times, the future Breeze-Way site is undeveloped. In the 1962 aerial, there’s nothing left of the Clinton; it looks just like the gravel supply it is now. But the Breeze-Way is there in 1962, further north on the same highway. The Breeze-Way was still outlined in a 1987 topo map, but the screen was gone by a 1992 photo.

A new page has been created for the Clinton Drive-In.