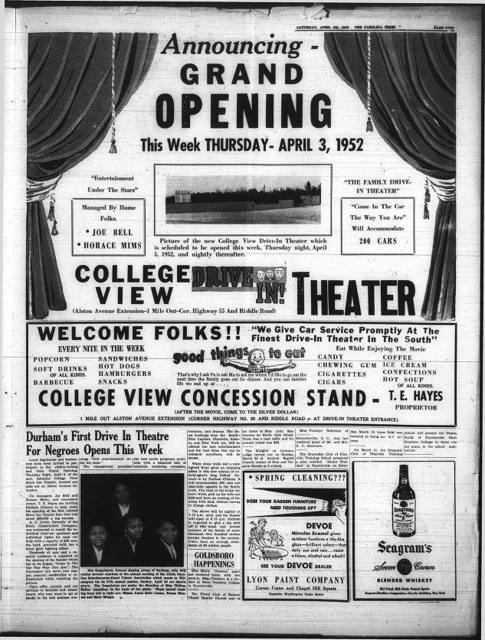 The College View Drive-In was Durham’s first drive-in theatre for African-Americans that opened to great fanfare on Thursday April 3, 1952 with the slogan “Entertainment Under The Stars”.

This was located on the Apex Highway which was the Alston Avenue extension on State Highway 55 at the intersection of Riddle Road near the campus of the North Carolina College, which is today known as North Carolina Central University. This was the only outdoor theatre that would allow African-American patrons where the other drive-ins throughout the city and the rest of Durham County were segregated. The drive-in accommodated 200 cars. The drive-in was owned by T.E. Hayes who was the proprietor and was managed by Horace Mims and Joe Bell(this was a black owned and black operated establishment that was a first in Durham and first in North Carolina). The drive-in had a large concession stand and other facilities.

The College View Drive-In did great business in serving the African-American community of Greater Durham until it’s closing in 1966 where it was totally demolished and replaced by the Glenview Memorial Park right off Apex Highway and Riddle Road were the College View once stood.