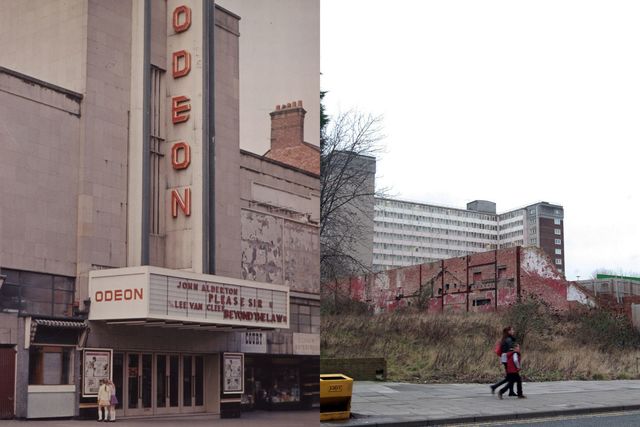 Located in Gateshead, Tyne & Wear. Built and operated by George & Alfred Black, Blacks' Regal Cinema was opened on 15th February 1937 by actress/singer Gracie Fields who enthralled the crowds by appearing on the flat roof of the foyer block from where she sang (according to my father who was a young man of 21) ‘The Biggest Aspidistra in the World’ which was to feature the following year in the film she starred in “Keep Smiling”. The opening film was Joe E. Brown in “Sons o' Guns” plus the The Great Magyar Troup of springboard acrobats on the stage.

The Regal Cinema was a very impressive building both outside and inside and had a capacity of 2,272 with 1,582 in the stalls and 690 in the circle. It was a sister theatre to three other purpose built Black’s Regals, namely Sunderland, Byker and South Shields (although the latter was a rebuild of the Empire Theatre). It was equipped with a Compton 2Manual/6Ranks organ with an illuminated surround in the ‘Rainbow’ style which was opened by organist J. Arnold Eagle from the Regal Sunderland who was the Black circuit music supervisor. The proscenium was 50ft wide, the stage 68ft wide and 37ft deep and there were ten dressing rooms. It was equipped with a Western Electric(WE) sound system. There was a café in the circle foyer. Stage acts continued to be a regular part of the programme until 1939.

Odeon acquired the Gateshead Black’s Regal Cinema on 1st January 1944 and it was given the new corporate name in April 1945. In the 1950’s Sunday concerts on the stage featured acts such as Roy Fox and Jack Hylton and their orchestras. On 11th April 1954 Nat King Cole and the Johnny Dankworth Orchestra played to a packed house.

Business was good at the Odeon although by the late-1960’s it was one of three remaining cinemas in the town together with the ABC Ritz and the Essoldo both of which, like the Odeon, were located on the High Street.

When it was announced in 1967 that the ABC Ritz and Essoldo would be subject to a compulsory purchase order for demolition to construct a flyover, hopes were raised by the Rank Organisation that business at the Odeon would improve considerably. This proved not to be the case notwithstanding the fact that it now played the best of the Rank and ABC releases.

In 1973, in nearby Low Fell, the large Capitol Cinema (an Essoldo for many years) made a return to films when its new owners, Classic Cinemas, tripled the building which reopened with capacities of 491, 221 and 221. Whether this had a negative impact on the Odeon or otherwise I am unsure but very shortly afterwards the Rank Organisation made a number of unsuccessful applications for a bingo license for their Gateshead theatre.

There was a final concert on the Compton organ on 12th January 1975. The Odeon was closed on 18th January 1975 with Clint Eastwood in “Thunderbolt and Lightfoot” and remained boarded up until Gateshead Council eventually climbed down in relation to bingo and thus on 14th April 1978 the doors opened once again for the purpose of ‘eyes down’ as a Top Rank Bingo Club.

The Compton organ was removed to Bolton some time after closure as a cinema, thereby leaving only one such instrument in its original home in the North East, namely that of its sister theatre, the Odeon (ex Blacks' Regal Cinema) Sunderland.

Even bingo was to leave the Odeon in 1995 when a new purpose built venue was opened in another part of Gateshead and the building was shuttered yet again until its eventual demolition in late-2003.

There have been various schemes mooted over the years for the site including a new luxury hotel but to date it remains vacant and unsightly.

One of the photos uploaded is of Gracie Fields on the roof from where she is captivating the thousands of people who have turned out for the occasion.

Gateshead High Street has probably neither before nor since seen crowds of this magnitude – and it most certainly never will again…..

My father used to take me to visit the Odeon around 71 during my time at school, to see Geoff Hornsby the Chief Projectionist, who became a very dear friend… It was through Geoff I actually gained the position of Trainee Projectionist at the Queens.. which I loved and stayed in the cinema industry for nearly forty years.

Filmlet re Blacks Regal/Odeons in Gateshead, Sunderland and Byker :–