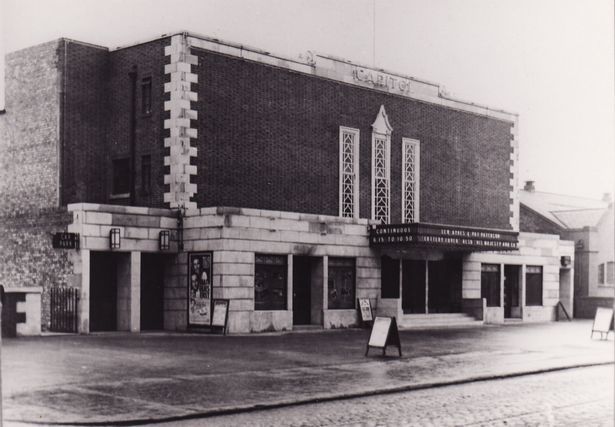 Located in the Low Fell district in the south of Gateshead, Tyne & Wear. The Capitol Cinema was opened 23rd December 1935. It was operated by the Newcastle-on-Tyne based Smelt’s Theatres circuit, and had 1,449 seats, a 30ft wide proscenium and was equipped with a Western Electric(WE) sound system. It was equipped with a theatre organ (make unknown). In December 1946 it was taken over by the Essoldo circuit. In 1953 the Capitol Cinema became the first cinema in the country to be equipped with an automatic projection change-over system named Essoldomatic, which was later named Projectomatic and later became Cinemation. It became a full-time bingo club from 14th January 1967.

On 2nd April 1972 it was taken over by the Classic Cinemas chain and re-opened as a cinema, renamed Classic Low Fell. On 14th April 1973 it became a triple screen cinema, with seating provided for 491 in screen 1, and 221 seats in screen 2 and screen 3. Essoldo were taken over by Cannon Cinemas in June 1982 and it was re-named Cannon Low Fell. It was closed on 16th April 1987. The building was demolished in 1999.

The 2nd April 1972 was the day that Classic Cinemas acquired the Essoldo circuit. The Capitol was part of this deal as was the nearby closed Chester Le Street Essoldo both of which were to return to films. The Low Fell cinema was to be twinned in a similar manner to their flagship Newcastle venue although Classic revised these plans and proceeded with a triple conversion which, as stated, opened to the public on 14th April 1973. Nothing came of the plans for Chester Le Street.

My first job was at the Classic as a projectionist on a youth training scheme in 1981/82. I enjoyed my time working there and it had a great atmosphere. I then went on to work in other cinemas until 2013. The Capitol/Classic was built on a site with a steep drop behind the frontage so you entered at front circle level (later cinema 1) and went down stairs to the stalls (later cinemas 2 & 3)