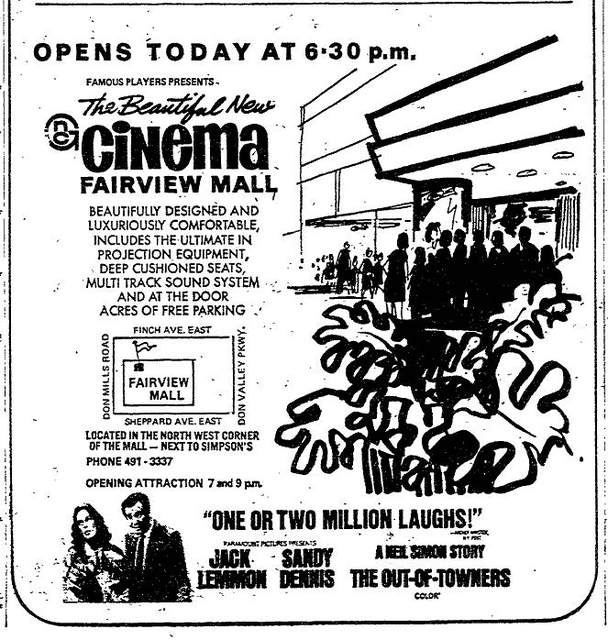 Opened August 5, 1970, an eight-screen multiplex located above the food court in Fairview Mall. Was once operated by Cineplex Odeon, but closed in the late-1990’s. It was reopened in 2001 as the flagship location for the new Rainbow Cinemas chain. Rainbow Cinemas showed first-run films, usually at a discounted price.

It was closed in January 2008. Since reopened with nine-screens.

I uploaded the 1988 grand opening ad.

See the photo section for the ad announcing the original theatre’s opening on Aug. 5, 1970.

This theatre should be listed as open (showing movies) and it has 9 screens. It is now operated by Cineplex since December 2008.

Asserted from 2 years ago, the Xscape Arcade replaced the lounge which moved to Don Mills VIP.

UPDATE: SilverCity signage still intact, but name changed to Cineplex Cinemas Fairview Mall (many of the SilverCities kept their signs or replaced altogether).

SilverCity signage replaced with Cineplex Cinemas signage as of 2019.

As mentioned by Mike, the cinema was owned by NGC Theatres, which Famous Players booked. They originally opened this cinema as a single screen, with its opening attraction being “The Out-of-Towners” in colour. NGC was sold off to Canadian Theatres of Calgary in 1973, who bought Odeon Cinemas of Canada to become Canadian Odeon. One thing led to another, and they became Cineplex Odeon. Sometime during these events, it was twinned.

Cineplex Odeon closed the duplex favouring a six-screen multiplex in another area of the mall that opened on December 9, 1988. Its opening films were “Twins” (THX), “The Land Before Time,” “Cocoon: The Return,” “Without a Clue” and “My Stepmother is an Alien.” Cineplex Odeon closed the six-screen multiplex on February 15, 2001, with its final films being “Hannibal”(THX), “Saving Silverman,” “Head Over Heels,” “The Wedding Planner,” “Snatch,” and “Traffic.”