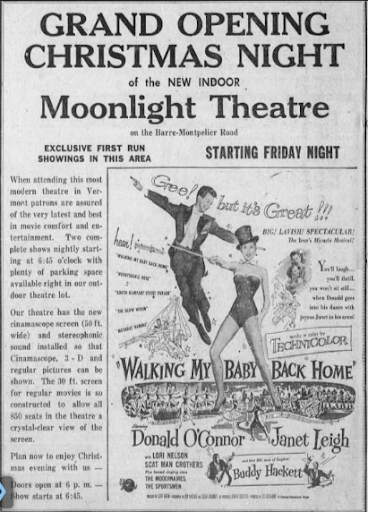 Montpelier was served by two drive-in theatres. This entry is for the Moonlight Drive-In and the other was the Twin City Drive-In on the same road, U.S. 302, the Montpelier-Barre Road. Richard Cody of Cody Enterprises created the indoor-outdoor Moonlight Drive-In likely named after Moonlight Terrace, the cross street of the drive-in. It was opened on July 17, 1953 with Audie Murphy in “Column South”.

Cody had his garage and land so used it for an outdoor theater that had 350 car spaces. But because the weather is cool in Vermont, he created a 900-seat auditorium with 675 main level seats and 225 in the balcony. The two RCA projectors were moved pointing outside at the projection booth’s rear in the summer and then redocked pointing inward for winter operation as the theater only showed one film instead of dual operation.

Cody’s neighboring garage was replaced becoming Cody Chevrolet still operating in the 21st Century. The theater was gutted and became Cody Chevrolet’s auto body shop. Enterprising folks going to the rear of that building will likely still see the projection booth portals for the outdoor operation which were still part of the structure as of the 2000’s.

Note: when using historic aerials, the theater is more easily mapped using the cross-street address of 1 Moonlight Terrace in Montpelier where the 1966 aerial shows the theater best.

The Aug. 22, 1953 issue of Boxoffice ran a lengthy article about the Moonlight. “An indoor-outdoor theatre, believed to be the first of its kind in the world, will be ready for year-around operation late this fall, when a four-wall theatre is added to the operations of the recently opened Moonlight Drive-In here. The new theatre, owned by Richard M. Cody, is unique in that both the drive-in and the four-wall house will be operated under the same projection system.”

Boxoffice also ran a two-page spread on the Moonlight in its Oct. 23, 1954 issue. This one had several photos of the setup.

The Unique Thing Is That The Outdoor Opened First On July 17, 1953 With “Column South”, But The Indoor Opened Months Later On Christmas Day 1953 With Donald O’Connor In “Walking My Baby Back Home”. The Indoor Marked The First To Have CinemaScope In The State Of Vermont With A 50x20 Screen.