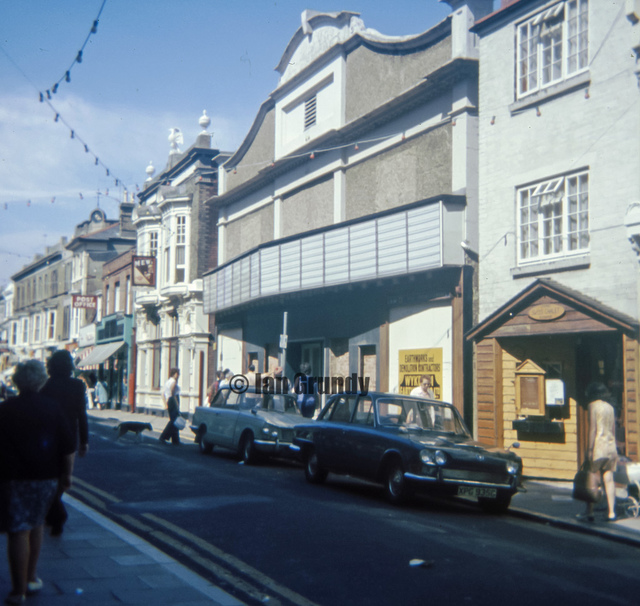 Located in Ryde, on the Isle of Wight. The Scala Cinema was opened 22nd December 1921. It was operated by Arthur Hill who operated the Royalty Cinema, Cowes and the Grand Cinema, Newport. Seating was provided for 580 in stalls and circle levels. The proscenium was 24ft wide. In 1930 it was equipped with a British Acoustic(BA) sound system (later upgraded to a Western Electric(WE) sound system). Later operated by Isle of Wight Theatres, in October 1965 they sold the Scala Cinema to the Leeds based Star Cinemas chain who re-named it Plaza Cinema after some modernisation, particularly to the facade. The Plaza Cinema closed on 20th June 1973. It became a Star Bingo Club, which closed in the 1970’s when the nearby Commodore Cinema was subdivided into a bingo club and cinema. The Plaza Cinema was demolished and a Gateway supermarket was built on the site, which in 2016 is an Iceland supermarket.

According to the Ryde Social Heritage Group the cinema opened 22 December 1921(what’s in a year), although it wasn’t listed in the Kine Year Books until a few years later. It was refurbished in 1966 reopening on 2 May, put back a week because of inclement weather. It eventually closed on 20 June 1973 with Elvis on Tour and The Trouble With Girls.