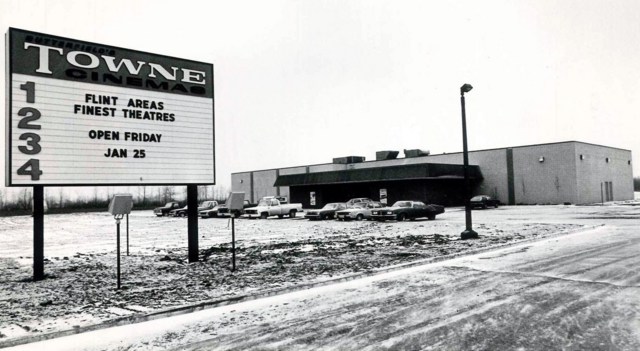 In 1980, Butterfield Theatres opened the Towne Cinemas at G-5380 W. Pierson Road in Mt. Morris Township (just outside Flint) on land that Butterfield was planning to develop a twin drive-in theater in the early 1970’s before township officials vetoed the redevelopment. It had four screens seating a total of over 1,300.

The layout was described as an east coast concept in which the auditoriums were laid out back to back instead of straight across. This layout allowed for future expansion (which never happened). It also had a platter system for projection so each auditorium had only oneprojector. Films were shown at staggered times to avoid congestion.

Unfortunately, the Towne for most of its existance as a cinema was relegated to showing second-run films and couldn’t compete with National Amusements (whose Showcase Cinemas in Burton also opened in 1980) for major first run releases. Butterfield sold this theater (along with most of its other theaters) to Kerasotes Theatres in 1984. When Kerasotes eventually settled a legal dispute with National Ausements concerning booking of first run films, it allowed the Kerasotes-owned Genesee Valley Cinemas to show first-run films at the same time as National Amusements Cinemas in Burton. This relegated the Towne Cinemas to permanent second-run status.

The Towne Cinemas was sold and became the Judah Full Gospel Baptist Church.