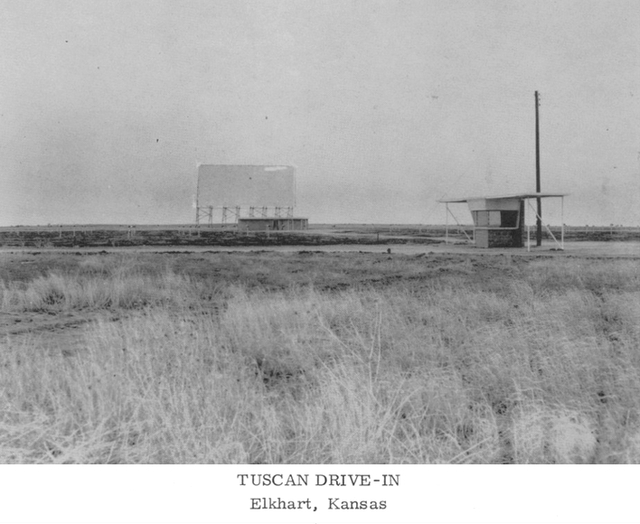 Shown in an advertisement in the 1957 Elkhart High School yearbook.

It’s visible in the aerial from 1972 straight south of Elkhart. It’s gone almost without a trace in the 1991 aerial.

This is interesting. There are remnants of TWO drive-ins visible and very near each other. One is located on HWY 95 just south of Elkhart on the east side of the road. The second is a little further south at the intersection of HWY 95 and Road B, sitting on the south side of Road B. http://tinyurl.com/j5le3ot

They both existed and operated at the same time in the early 1970s which seems extraordinary since the tiny town of Elkhart had to have supported them both.

Another potential issue is that both drive-ins are located in Oklahoma. So, the proper map designation would be for Oklahoma, not Elkhart, Kansas. Unfortunately in terms of Google, I cannot get it to map accurately to either drive-in.

It seems unlikely that they are BOTH the Tuscan Drive-In since they both appeared to be operating at the same time in the early ‘70s. However, I really do not know.

The second one is the Sands Drive-In – starting a page on it now.

A closer address is HWY 95 and US 56, Elkhart, OK. The drive-in is located about ¼ mile to the south of the intersection on the east side of HWY 95. Today, it is private property, but you can still make out the faint ramps. http://tinyurl.com/z26t83h

The address should read Elkhart, Oklahoma and not Kansas since the drive-in sits on the Oklahoma side of the border. It appears that the town of Elkhart crosses the border much like Kansas City is in both Kansas and Missouri.

Added another photo from ‘58. If you think it looked desolate in the first shot, it’s even more so in the snow.

It does appear from the latest Google map that the projection booth/concession stand is still intact.

Eva is a tiny, unincorporated community in Texas County, Oklahoma, about 15 miles south of Elkhart KS.