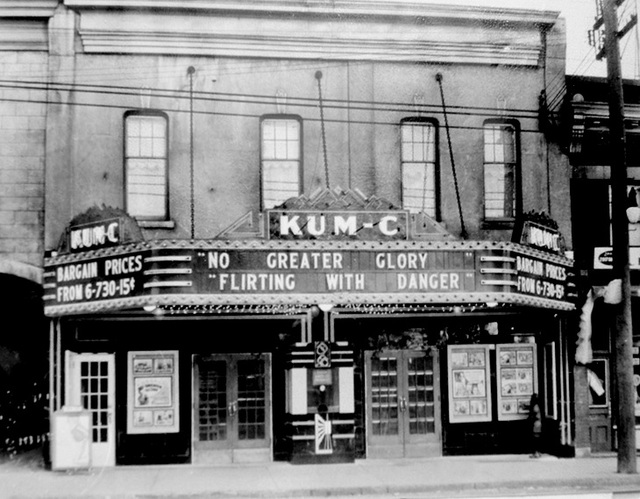 Located in the Parkdale neighborhood to the west of the city centre. The Kum-C Theatre was a silent movie theatre. It was renovated in 1930 to the plans of architectural firm Kaplan & Sprachman opened prior. It was part of Nat Taylor’s 20th Century chain. The Kum-C Theatre operated into the 1960’s.

After closing it became a martial arts school and today is a vintage clothing store named Public Butter.

Here is Doug Taylor’s weblog post about the Kum-C Theatre. It has numerous photos.

According to Taylor, the Kum-C was in operation during the silent era, perhaps as early as 1919, but a list of theaters listed in Canadian newspapers in 1914 (PDF here) included for Toronto, theaters called the Kum-C, the Kum-Back, and the U-Kum. No addresses were given for any of them, though, so the Kum-C of 1914 might have been in a different location.

Again according to Taylor, plans for a remodeling of the Kum-C in 1930 were done by Kaplan & Sprachman.

It’s a very odd name indeed, but even odder is that there was another theater of the same name, located in Detroit. I’ve never discovered the origin of the name (it’s probably just “come see” as in come see the movie), or if there was any connection between the two houses, but comme ci, comme ça.