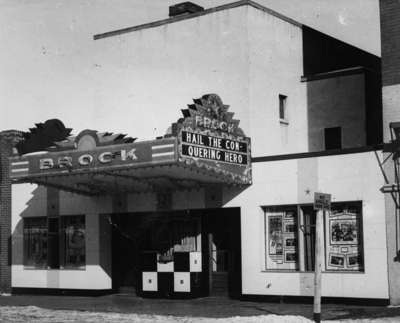 According to an item in February 3, 1993, issue of the Whitby Free Press, the Brock Theatre opened on April 7, 1938, and closed in 1985. The building was gutted and the interior rebuilt to accommodate a bar in 1990.

The front of the building has been so drastically altered as to be unrecognizable, and I would imagine that the interior has undergone equal transformation. A few photos of the original streamline modern interior can be found on this page of the Whitby Public Library web site.

This house replaced an earlier theater down the street which had opened in 1910 as the Royal Theatre and had been renamed the Brock Theatre in 1934, according to the May 15, 1991 Free Press.