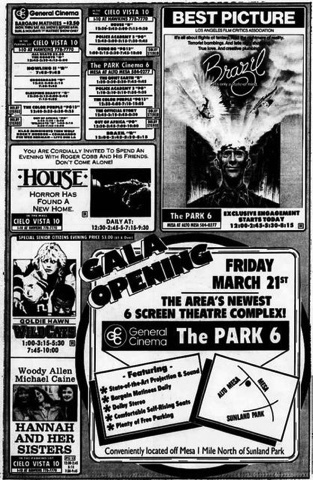 Not to be confused with the Cielo Vista Mall Cinema I, II, III which was in the mall, that theater was never added to. G.C.C. had built three more in parking lot Cielo Vista Cinema IV, V, VI, opening March 17, 1978. On December 14, 1985 another 3 screens were added. One can only guess that the one in mall was then closed.

The Cielo Vista Mall became marketed as the Cielo Vista Mall 10 in 1985 screens to make it look more impressive than two aging facilities - one a triplex in the mall and the other a carved up facility that had expanded to seven screens in December of 1985. It still listed the Cielo 3 and Cielo 7 showtimes for clarity. But on September 6, 1998, with General Cinema in free-fall economic collapse having been outflanked by theatre circuits building megaplexes, it closed the interior mall cinema. That left this facility as the General Cinema Cielo Vista 7 solo.

AMC took over the facility and the Sunland Mall and Park Cinema 6 on April 5, 2002. AMC didn’t care much for its El Paso portfolio closing each of the theaters. It closed the Cielo Vista on August 24, 2003. The Park closed October 23, 2003. The Sunland held on closing September 26, 2004. It was razed and a Hooter’s and a Cinemark megaplex took its spot.

Should be the AMC Cielo Vista 7 formerly….