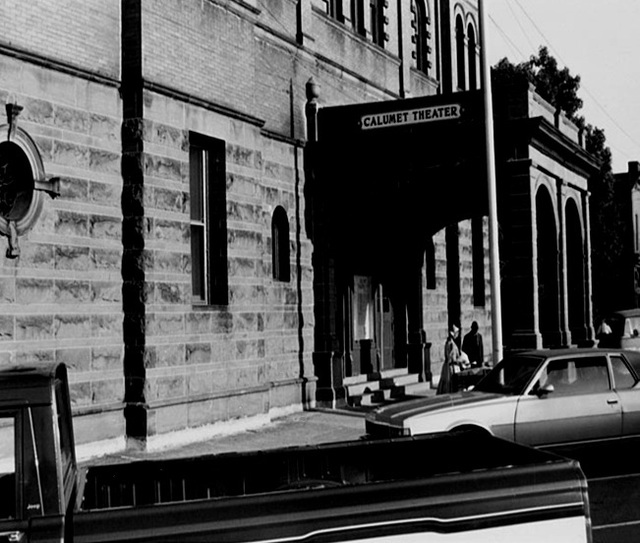 One of the first municipal theaters in America, the Calumet Theater opened on March 20, 1900, “the greatest social event ever known in Copperdom’s metropolis”. The theater contained a magnificent stage and elegant interior decorations, including an electric copper chandelier.

For over a decade, Copper County audiences witnessed the broad panorama of American legitimate theatre, and many prominent stage personalities, both American and European, trod the boards of the Calumet Theater. By the 1920’s, motion pictures replaced live theatre, and subsequently, live drama returned to the Calument Theater. The reopened community theater resumed its position as a focal point of civic pride for the people of Calumet and the Copper County.

The Calumet Theater is a two tiered, yellowish brown brick vernacular Renaissance revival structure with a clock tower. It is located in a large separate unit of the Calumet municipal building. The theater rests on Portage Entry sandstone and the roof is covered with copper and trimmed with copper cornices. A portecochere covers one entrance and there is an illuminated, columned marquee at the front entrance on Sixth Street. The elegant interior features fantastic murals on the vaulted ceiling and holds 1,200 seats with no obstructed views.

The Calumet Theater is an imposing structure with statewide significance. Local architect Charles K. Shand designed the building and William Eckert of Chicago was the interior designer who chose the crimson, gold and ivory color scheme. The clock tower originally rose to a square open bell tower which was topped by an octagonal cupola.

After years of use as a live theater hosting nationally renown acts, the building functioned as a motion picture house and civic gathering center. By 1941 it was operated by Fox Wisconcin Circuit through their subsidiary Fox Calumet Corp. By 1950 it was operated by the Thomas Theatre Group. Now renovated and owned by the Village of Calumet, the theater hosts live entertainment once again.

I am helping the National Park research the history of this theater and specifically am looking for information on the 1934 renovation featuring art deco type murals designed by artist Alfred Messner. If anyone can direct me to a resouce I would be most appreciative.

Here is an interesting webpage:
http://tinyurl.com/ubtmo

Appreciate the photos and other postings, but am still looking for info on the 1934 renovation. I also have pictures of the theater—inside and outside—if anyone is interested.

A postcard view of the Calumet Theatre in Calumet Michigan.

With thanks to Charles Van Bibber for one the most articulate theater descriptions I have seen on Cinema Treasures to date.

On December 24, 2013 the village of Calumet will host a Centennial Ceremony honoring those lost in the tragedy at the Italian Hall. Please see the theatre’s official website for more information.

I worked as an actor/apprentice in summer stock at this theater in 1966. It was incredibly beautiful. I played Finian in Finian’s Rainbow.

For a time when it went to movies it was operated by the Thomas Theatre Group.