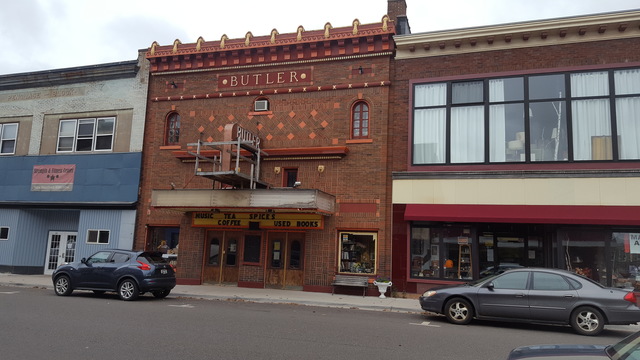 A recent article by the AP said that the historic Butler Theatre in Ishpeming was being transformed into an antique mall. This was a little shocking because this is the theatre where the world premiere of Otto Preminger’s classic film “Anatomy of a Murder” was held.

The theatre was rather tacky inside with worn curtains, red walls that looked like they were painted with tempera paint and gold leaf that was most likely gold spray paint. The sound system included several large box speakers with harp shaped speaker areas.

Used as a bookstore, occasional live performances are presented.

I was the last owner of the Butler (managed since 1977 and purchased in 1982). It was the largest theatre north of Milwaukee built in 1915 for showing films exclusively. There was no stage,,just a platform in front of the screen with silent films accompanied by a pianist. The first theatre in upper Michigan and northeast Wisconsin to install true 6 channel dolby stereo sound with the first stereo film being “The Black Stallion” The first major restoration since the 1940’s when it was part of the Fox Theatre chain. We constructed a thrust stage, orchestra pit, stage lighting and sound, and new seating on the main floor. The interior was fully restored, and the exterior was also restored with a photo showing the front of the theatre exhibited at the Detroit Institute of Arts. An electronic Wurlitzer Theatre organ was installed in the pit, where I played before all family and holiday shows. Live shows were done several times a year. More photos and history will be posted soon – Ed Wales

According to the first link, Potter was an aka.

Here is the website for the antique mall:
http://www.butlertheaterantiquemall.com/

The June 3, 1916, issue of Electrical Review and Western Electrician said that the Butler Theatre was designed by the architectural firm of Charlton & Kuenzli, which had offices in Milwaukee and Marquette. Demetrius F. Charlton had designed the Ishpeming City Hall in 1889, prior to his association with Edwin O. Kuenzli.

The manager of the next door antique mall said that the theatre’s owner was a retired military vet who essentially runs it as a hobby. He sells books out of there and occasionally will host live musical performances. A current photo has been uploaded.