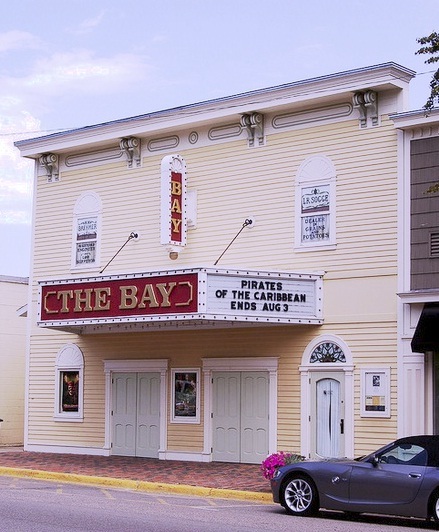 The tiny harbor village of Suttons Bay, situated along the rocky Leelanau Pennisula coastline, is one of the last places one would think to look to find a foreign film theater. However Suttons Bay is home to a renovated Victorian movie theatre that has been a favorite haunt of discriminating film buffs since 1978.

Whether your attention is to view a foreign classic, an intriguing documentary, a first run popular movie or “One of The Boys” live stage presentations, the theater’s charming period architecture sets a mood which tells you with one look that you’re in store for a special evening.

The Bay Theatre, located at 214 North St. Joseph Street opened in 1946 and has been an independant, family owned movie theatre since 1976, it is managed by Robert Bahle.

Unlike most modern movie theaters, Bahle hand picks the films presented at the Bay. While he generally bases the selections on the level of audience support a film has garnished in other locations, he often relies on his own gut reaction to showings.

“If a film captures my attention and captivates me,” he said, “I get it.”

Bahle makes a generous offer that no true film lover can refuse. If there’s a film you’re longing to see, but haven’t been able to find a theater playing it, Bahle wants you to give him a call. He’ll do his best to satisfy your interest.

You may also not expect to find high tech sound in this out of the way theater. Yet the Bay Theatre has a sophisticated sound delivery system which sets it apart from many larger movie theatres. In 1994, the HPS-4 system was installed by a Boston-based sound expert. According to Bahle, it is the only system of the kind in Michigan.

Here is the site for a film series that is shown at the Bay Theater:
http://www.beyondthebay.org/

A very pleasant theatre with original wood floors and great acoustics. A good selection of films throughout the year including film series in the winter and part of the TC film festival in the summer. Usually small crowds and easy access.

I saw the Harrison Ford movie “Presumed Innocent” here years ago, and it was a wonderful experience. My Grandparents lived in Traverse City at the time on the west side of town, so it was not far to travel up to Suttons Bay. I’m glad we did, the movie was good, and the theater was great, a really cool small town old fashioned theater. Well worth visiting!