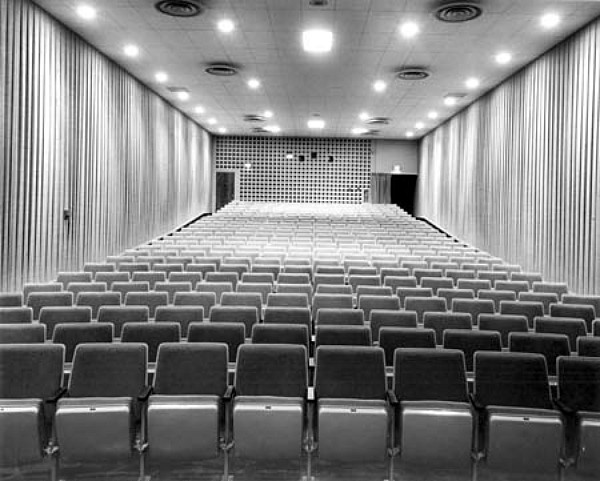 In 1970, John D. Loeks along with nine other stockholders, formed a new theater circuit called Auto-Cine, Inc. with the intention of building small, automated twin theaters throughout western Michigan. The Alpine Theatre, which opened on Sepetember 23, 1970 was the second theater in this new circuit.

The major premise in the twin theaters was to operate two auditoriums while using a common box office, concessions and rest room facilities and a minimum of personnel. A manager also handled the threading and starting of the films and the box office cashier doubled as a concession clerk. Projectors were outfitted to use larger reels, accommodating up to one hour each, instead of the usual 15 to 20 minutes.

In an article in the Grand Rapids Press, Loeks says, “What it amounts to is that we can set up two projectors, get the show started and have the whole operation complete itself without any manual assistance. We’ve moved from the old hand-crank projector to almost complete automation. Even some of theater advances still had the projectionist installing four to six reels for a feature film. Now only two are needed.”

The article continues to explain, “The first projector even turns itself off and activates the second projector through a magnatic strip attached to the film. The only real problem is when a film tears or splits, which calls for immediate splicing, but modern movie film is such that it rarely occurs.”

This used to be the Alpine Twin, until Loek’s theaters moved in across the street and against Jack’s wishes. (I really miss Jack Loeks running the theaters. He was a great guy.)

When it became the Alpine Four, I remember that the idea was to show older and special run movies. Unfortunately, it could not compete witht the big theater across the street.

This is the theater we “graduated” to when we were old enough to be trusted outside the drive-in. I saw a lot of movies in this great theater.

Man, I can remember seeing so many movies here as a kid. It was only a dollar for the longest time, but did increase to two at the end. My mom would take us, and we would get candy at the K-Mart next door and sneak it in…

@Shanahan-it’s nothing now. There’s a big box strip mall there now. Remember the restaurant next door? (The Clock) That had a great old 50’s sign in front, and it, too is gone.

Thanks, Amy. I think I read that the KMart on that side of Alpine is now history, too

A page of Boxoffice Magazine’s issue of October 25, 1971, was devoted to the Alpine Twin Theatre (its original name.) There were a few pictures of the theater. The twin auditoriums each had 325 seats in a continental arrangement. The side walls were curtained, and the back walls were faced with acoustic tile. The project was designed by Mel Glatz Associates.

A manager started the movies and a concession stand girl handled the Box office and serving popcorn,and this a “classy” theatre.

I know how the description sounds, but believe it or not, it was a high quality experience at the beginning. Jack Loeks might have always had one eye on the bottom line, but his theaters were, at least most of the time I went to them in Michigan, well-run and clean theaters with good projection and sound. After he sold out to Loew’s-Cineplex (which soon after merged with AMC), many of Loek’s former theaters declined considerably.

As cited in my retrospective article, “The Game Changer”, the Alpine (then a twin) held the longest-running engagement of “Jaws.”