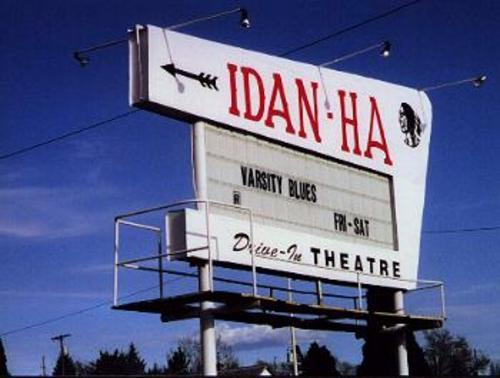 The Dawn-A-Vu Drive-In was opened around 1955 when it was operated by Donald Mendenhall. In the late-1970’s it was renamed Idan-ha Drive-In. Jeff and Shauna Bowen, who also run the indoor Idan-ha Theatre on Main Street, operate this drive-in, which is open during the summer months.

This may be closed. The website no longer works. Hunzeker Ford is taking up part of the lot. The screen and snack bar are still there.

Both theaters are still open, but the website remains down. They do have a Facebook page though for movie listings, it appears the drive-in has been a single feature only for years. In 2010, Jeff & Shauna Bowen sold the property to Craig Davis, but continue to operate both theaters. Thyy have signed up for the Honda Projectdrivein competition for a new projector. As well as setting up their own Save The Drive-In fundraiser to keep it from closing.

The Idan-Ha was open for the 2014-2016 seasons, about mid-May through August. See its week-by-week notes on Facebook: https://www.facebook.com/IdanHaDriveinTheatre/

When did it open? The Dawn-A-Vu was listed through the 1976 IMPAs, and my next copy, 1982, shows the Idan-Ha. A 2013 article in the Idaho State Business Journal claimed “The Idan-Ha Drive-In has been a part of Soda Springs for nearly 60 years,” so I’m guessing that the Dawn-A-Vu changed its name in the late 1970s.

My guess was just verified by a note from the current Idan-Ha crew. “I am uncertain when the name changed but I thought that it happened when Owen owned it in the 80’s.” Since it’s in the 1982 IMPA, the name change probably happened around 1980, give or take a year.

Hey, this drive-in wasn’t “closed in 2014” and should be marked as open now. (Seasonal, of course.) It’s showing the latest Spider-Man installment tonight. Check its Facebook page.