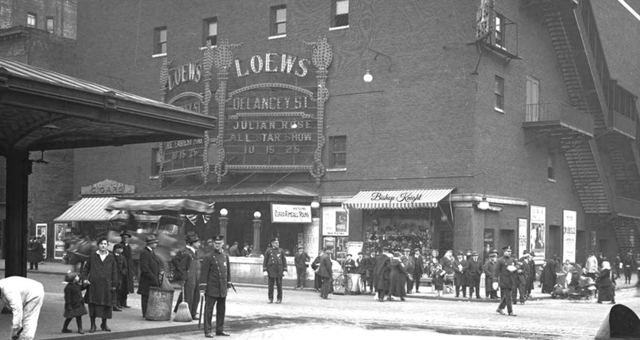 Located next door to the historic Ratner’s dairy restaurant, the Loew’s Delancey Street Theatre was once a cornerstone of life on New York’s Lower East Side. It was built in 1911, opening in 1912. But, with the later rush to the suburbs, the theatre and the surrounding neighborhood declined. Loew’s Delancey Theatre was closed around May 1976.

Today, the theatre remains closed, and has been converted to retail space. Specifically, the front facade and first level of the theatre are now occupied by four different tenants, including a Burger King, Subway, and Children’s Place store. A sign on the theatre’s exterior indicates the upper floors are also available for rent.

The current condition of the theatre’s interior is unknown, though it’s probably safe to assume most, if not all, of the theatre is gutted.

Sadly, the Lower East Side remained dramatically under-screened. Until the February 2002 opening of the Sunshine Theatre, there was not a single movie theatre on the Lower East Side and the nearest multiplex or megaplex was at least 15 minutes away. The Sunshine Theatre was closed in February 2018 and was demolished in July 2019. However the 14-screen Regal Essex Crossing & RPX opened diagonally across Delancey Street from the Loew’s Delancey Theatre in April 2019.

Dear Mr. Dousmanis and CinemaTreasures readers,
[By the way hello from a fellow AMICA member!] You mention being up in the upstairs part of this theatre, and specifically, “The top floors of the dressing rooms contained old air conditioning compressors and equipment. Well stripped by past junkies. There is more equipment under stage stand pipe pumps” Could any of this “equipment” or “pipe pumps” have been parts or pieces of the old Seeburg-Smith theatre pipe organ that was installed in this theatre?

According to “The Encyclopedia of the American Theatre Organ” by Mr. David L. Junchen, pg. 630, the “Delancey Street Th.” in New York, New York, originally had a Seeburg-Smith theatre pipe organ installed in 1921. This organ had a 5 horsepower Kinetic blower, serial #J169, which produced 10" of static wind pressure.

Although the book does not give the size (# of manuals, # of pipe ranks) of the organ (not known at the time of publication), my comparison of the data on known Smith organs shows that only the very largest organs the company built (10 to 16 ranks) had blowers that were 5 horsepower.

Does anybody know where the Seeburg-Smith organ from the Delancey Street Theatre, or its parts, is/are today? Thanks!

Are there any photo’s out there of the inside of this theatre?, I also wonder if there is anything left of the original auditorium & balcony inside, some say there is still some stuff intact inside. Makes me wonder.

AndrewBarrett: It has just occurred to me that johndousmanis was probably talking about standpipe pumps, which were part of a theater’s built-in firefighting equipment, required by law in New York. It wouldn’t have had anything to do with the organ. Standpipe is another name for a fire hydrant.

theatrefan: I’ve just noticed in Street View that there is a white square with an X through it painted on the front wall of the theater, with the words “ABOVE STORE.” I wonder if that could be an indication that the building is vacant above the first floor? It’s quite possible that in this neighborhood, which was very low rent for a long time, only the ground floor was ever converted for other uses.

No new windows have been cut into the upper parts of the walls, so it certainly wasn’t converted into offices. In fact a few old windows (maybe for the mezzanine lounge, manager’s office, or rest rooms) that must have been part of the original design have been sealed up. I’d say the chances are pretty good that something remains of the upper part of the theatre.

Joe, I have checked the NYC Department of Buildings information system website, it does not look like any demolition permits were issued for the upper levels. So there might be a good chance that some of the original aspects of the Delancey as a Movie Theatre could indeed exist in the upper portions of the building.

Circa 1962 photo added courtesy of the AmeriCar The Beautiful Facebook page. Marquee on the far right. Great pic if you like picking out automobiles.

In an old issue of the THS publication “Marquee” from 1982 it was mentioned that part the original neon Loew’s marquee logo from the Delancey wound up in the Century Restaurant on West 43rd off Times Square it filled the entire back wall of the bar. Does anybody here know what ever happened to it after?

And now, the Sunshine is gone, too.

Theatrefan – There’s nothing left of the interior. Not sure when it was removed though.