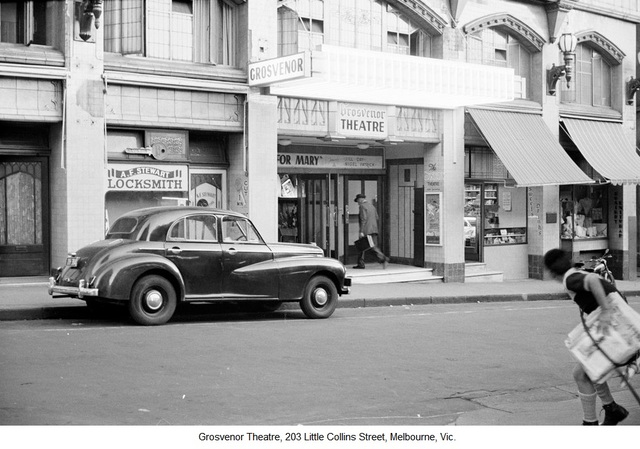 Built in 1927 as a joint venture between the Royal Victoria Hotel and the Collins Street Baptist Church, it opened as the Central Hall in 1928 with seating for 800. It was designed by architects Gawler & Drummond. It was taken over by Oxford Theatres Ltd. in 1942 and opened as the New Central Theatre on 30th October 1942 with Mezhinski in “Professor Mamlock”. After some improvements in 1943 the seating capacity was reduced to 641.

On 26th October 1945 it was taken over by the Greater Union chain and played the film “I Live on Grosvenor Square” starring Rex Harrison and Anna Neagle. The film was so popular that the cinema was re-named Grosvenor Theatre and began a policy of playing British films only. In 1955 architects Cowper Murphy & Associates drew plans for a remodel of the theatre.

In July 1965 Greater Union opened their new Bercy Theatre on Bourke Street, and the Grosvenor Theatre began playing mediocre films. It was closed on 27th June 1968 with Robert Wagner in “Don’t Just Stand There” and Jack Lord in “The Doomsday Flight”. The interior of the theatre was gutted within weeks of closing and was converted into a car park for the adjacent Victoria Hotel.