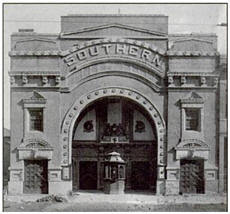 The Southern Theater was originally built in 1910 as a small neighborhood community center and live performance space for the Scandinavian immigrant community on Cedar Avenue, also known as “Snoose” Boulevard.

In the 1940’s it changed hands and was converted into a parking garage for heavy equipment. This is also when its original façade was removed and the current brick Art Moderne style one was added. In the 1950’s the building was occupied by a gift shop and later a ‘fancy’ restaurant called the Gaslight.

The restaurant closed in the mid-1960’s and the building sat vacant until the renowned Guthrie Theater tried it as a second venue for performance but that also failed. A non-profit neighborhood group formed shortly thereafter and the 209-seat theater remains open to this day as a venue for the performing arts.

Contexual shot-
View link
The building to the right remains, it is the Town Hall Brew Pub. Everything to the left of the theater is gone, it is now the 35W trench.

A. J. KAVANAGH IS ONE GRAND HUSTLER / Dakota Man Takes Over a Minneapolis Theatre While His New Grand Forks House Is Building

A J. KAVANAGH, exhibitor of Grand Forks and Jamestown, N. D., has taken over the lease of the Southern Theatre, at Seven Corners, in Minneapolis, and will begin the operation of this house July 1. Mr. Kavanagh plans to renovate the theatre and place it in first class condition. He stopped over in Minneapolis recently while en route to North Dakota from Chicago, where he purchased a new $8,000 pipe organ for the new picture house he is building at Grand Forks to replace his old Grand Theatre, which was burned to the ground. Construction of the new theatre is now under way at Grand Forks, and it is to be completed by October 1. The house, which will cost at least $80,000, will have a fifty-five foot front and a depth of one hundred and twenty-five feet. It will be a fireproof, concrete, brick and tile structure, larger than concrete, brick and tile structure, larger than any present picture theatre in the state.