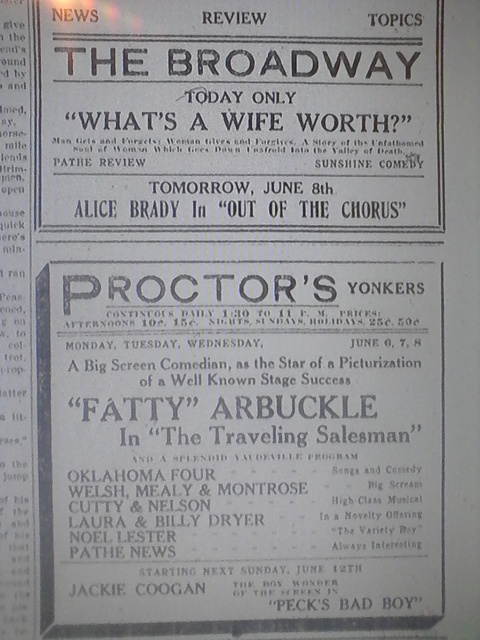 The Broadway Theatre was opened on February 15, 1915 with Charles Chaplin in “Tillie’s Punctured Romance”. It is shown in a 1919 Yonkers, NY directory under picture theatres. It was closed due to a fire on April 12, 1931. It was repaired and reopened in 1933. It was closed in 1939. In November 1939 it reopened as the Roxy Theatre which operated until February 23, 1941. It then went back to the Broadway Theatre name, programing live events until it finally closed in 1943.

The 1932 edition of the Film Daily Yearbook lists a Broadway Theatre in Yonkers, New York with 600 seats.

Ads for this theatre started to appear in 1915.

The Broadway Theatre appears to have opened on February 15, 1915 with “"Tillie’s Punctured Romance.” It closed but was reopened under new operators in June of 1916. The theater closed again and seemed to have almost annual operator changes. George Martin was another operator in 1927. The Chyrsedge Co. Circuit took on the Broadway in October of 1928. It closed and then was reopened in 1931 after being equipped for sound. An April 12, 1931 fire closed the Broadway again.

In 1933, the theatre came back after repairs as an independent offering foreign movies including Irish and Hebrew language films. The theatre closed in 1937. A new operators took on the venue going for German language films before closing in 1939.

A new operator relaunched the Broadway after a six-month closure in 1939. In November of 1939, it was renamed the Roxy Theater. It retained that name until February 23, 1941. The venues final film booking was, “This is Ireland.” It reverted back to the Broadway Theatre but was booked only for live events until 1943. In its movie life, the Broadway appears to have had upward of 15 operators in 26 years.