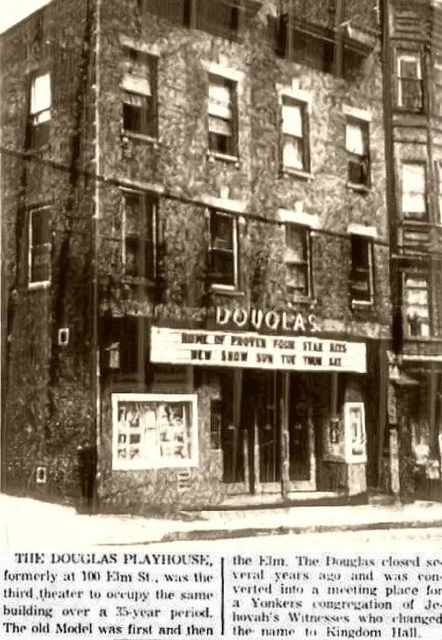 The Model Theatre was opened in January 1913. It is shown in a 1919 Yonkers, NY directory under picture theatres. It was closed by 1932. It reopened on December 25, 1937 as the renamed Elm Theatre. In August 1948 it was renamed Douglas Playhouse. In 1951 it was renamed Douglas Theatre. By 1958 it had become a Kingdom Hall for the Jehovah’s Witnesses.

A Model Theatre is listed in the 1932 Film Daily Yearbook for Yonkers, New York as closed with 280 seats.

Further research shows that the Model Theatre was later renamed the Elm Theatre and was last known as the Douglas Theatre.

James Durkin opened the Model Theatre here in January of 1913. Chrsedge Theatres took it on and it was operated with its sister, silent house, the Riverdale Theatre for many years. In 1927, George Martin took on the venue. The theatre converted to Western Electric sound in 1929.

On Christmas Day, 1937, the theatre relaunched as the rebranded Elm Theatre. 1939, it was operating as the Elm Theatre showing Czech and Ukranian films. In August of 1948, the became the Douglas Playhouse playing “proven four star film hits.” Locals contended that by the time the Douglas got the “proven hits,” it’s because they had played four other theaters prior to getting there. In 1951, it was known as the Douglas Theatre. In 1958, the Douglas was being used by Jehovah’s Witnesses.