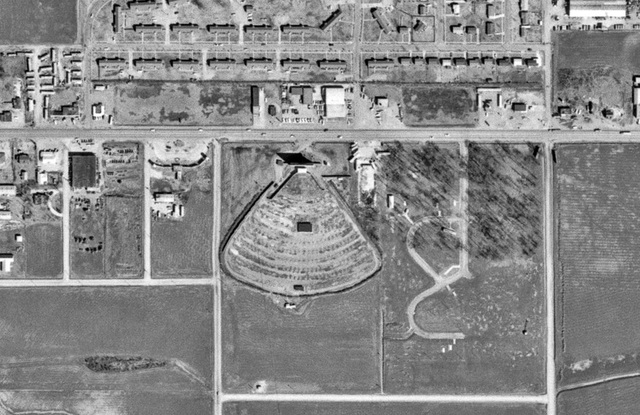 The Sunset Drive-In opened on August 18, 1950 with Maria Montez in “Sudan”. It had a very open policy of booking just about any film banned by infamous censor Lloyd T. Binford of Memphis, Tennessee. Binford rejected all films with train robberies, any film with a person of color in the same scene as a white person, and any film that could lead to juvenile delinquency. Sunset Drive-In owner J. Jackson Rhodes loved the attention of the banned film titles as did its manager of six years Bob Kilgore. It was soon taken over by Dave & Abner Lebovitz who also operated the Skyview Drive-In and Lamar Drive-In, both in Memphis and they retained Bob Kilgore as manager of the Sunset Drive-In.

In addition to the 532 spaces for cars, the Sunset Drive-In had an outdoor seating area for 400 people. In the early-1950’s, the West Memphis population was just 2,225. But in the three post-War West Memphis theatres in 1952, there were more theatre seats than the town’s entire population. Yet the tiny town’s ozoner was often packed. The notoriety of the banned films led to the Sunset Drive-In getting 65% of its business from out of state with just 5% being from tiny West Memphis.

Binfordized films including “Night of the Hunter” (Binford comment: “Rawest film I’ve ever seen”); “Jesse James’ Women”, the re-issue of Hitchocock’s “Notorious", “Island of the Sun", “Violated", “Night of the Hunter", “Black Tuesday", “Blackboard Jungle", and “Rebel Without a Cause” (Binford: promotes juvenile delinquency). When the theatre began using a mobile billboard truck across the river in Memphis to promote films including “She Wolf", the city objected with police chief McDonald banning the practice calling the half-nude women on the poster a distraction to drivers.

The Sunset Drive-In presentation improved in 1956 with new RCA Century projectors and brighter lamps to hit its new CinemaScope screen that was 105’ feet in width. With the local West Memphis PTA and Garden Club each attacking the Sunset Drive-In for playing vile films, that only helped increase publicity. A team of flaggers tried to reduce the major traffic snafu off of U.S. 70 that occurred at show’s beginning and end. And manager Bob Kilgore went on the offensive stating that the Sunset Drive-In’s policy was in the tradition of the First Amendment and that the banned films he was booking were actually playing everywhere in the United States except Memphis.

As the Sunset Drive-In lease came due, the MPAA instituted a self-regulatory code in 1968 that all but gutted the need for censor boards. As a result, racy films appeared in Memphis and its censor board was disbanded. The Sunset Drive-In opted to fade into the West Memphis night in 1969. It was demolished becoming a long-running auto salvage yard. West Memphis - once a bustling escape for sinners and movie-goers - was movie theatreless once again.

The area covered by the drive-in was considerable. The screen was located in the parking lot next door to the auto salvage site. You can still see traces of the outline of the drive-in that emanated from the screen southwest towards what is now an abandoned trailer park. http://tinyurl.com/zkeemg3

In the early 50’s, there was another drive-in in the West Memphis area, the 70 Drive-in.

Was this aka West Memphis Drive-In at one time?

Iceberg….where was the 70 Drive-In located at?

I believe the 70 Drive In was advertised as being 2 miles west of West Memphis. I don’t know any specifics beyond that. It was in operation around 1951, operating in competition I guess with the Sunset. I don’t think it was around but a couple of years.

The April 9, 1955 issue of Boxoffice ran a lengthy story about the Sunset, owned by Abbott Widdicombe and managed by Bob Kilgore. The drive-in installed “the first Midsouth CinemaScope screen” with a 70x105-foot tower which was so big that radio station KWEM moved its studio into its base. “An ornamental radio transmission tower extends 20 feet above the 70-foot-high screen tower, and the actual transmitting tower is nearby.”

New construction has wiped out all traces of the drive-in.