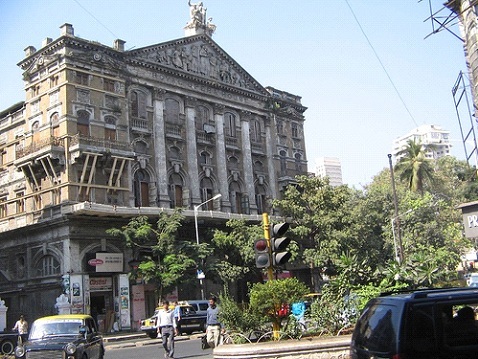 The Royal Opera House on New Queen’s Road (Charnie Road) was built in 1910 by Maurice Bandman, an entertainer from Calcutta. Designed in a magnificent Baroque/Rococo style (architect unknown), it opened in 1911 presenting dramas and high-class variety when films were also part of its programming. Seating was provide for c.300 in the orchestra stalls, c.200 in the dress circle and c.400 in the upper circle levels, with boxes at the rear of the stalls and along the side-walls on all three levels which seated around 100. In 1924 it was converted into a full-time cinema by Pathe and re-named Pathe Cinema. In 1929 sound equipment was installed and it was re-named Madan Talkies, which operated until 1932 when it reverted back to its original Royal Opera House name.

In 1935 the interior was remodelled in an Art Deco style, which removed the side boxes. It became the home of Warner Bros-First National Pictures.

It closed as a cinema on 2nd February 1991. It had occasional use as a special events venue and was last used in 1993 when the Kathiwad fashion show was held in the building. For the following 20 years it was left vacant and in a state of disrepair.

Owned by the Maharajah of Gondal since 1952, work began in 2008 to restore and renovate the, by then, Listed building to the plans of heritage architect Abha Lambah. In late-2016 it was reopened as an Opera House (the only one in India). On 20th October 2016 it is due to host the MAMI Film Festival.