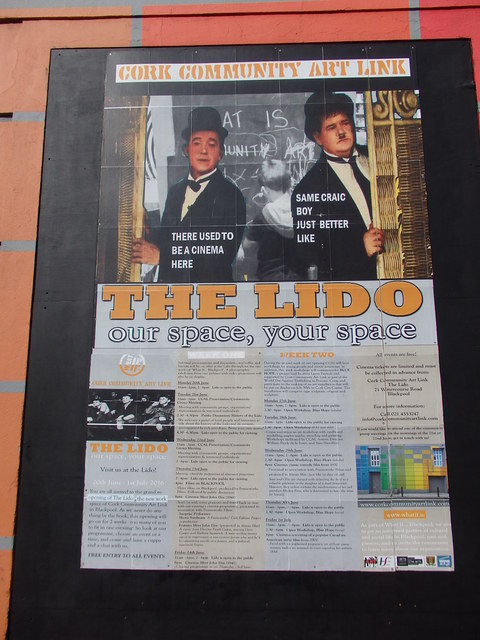 Located in the Blackpool district of Cork. The Lido Cinema officially opened on 25th October 1931 with “Wild Company”, providing hours of entertainment for local children who could not afford the ticket price of the mainstream picture houses. It was built on site of Blackpool Cinema which opened on 2nd November 1920 and was owned by Mrs Hussey. It had closed by 1926 as it was not up to standard.

The Lido Cinema was originally owned by Eddie Coghlan and its auditorium was in a Venetian style. It closed on 14th April 1962 as a result of a stabbing that happened a few days earlier. It was reopened by Paddy Coughlan as the Palladium Cinema on 21st June 1962 with “Three Coins in the Fountain” but this was short-lived and it closed again in 1965. It became home to O’Meara Camping Stores for many years.

City officials bought the former Lido Cinema in October 2014 for €57,000 and it has become home to Cork Community Art Link. From Monday 20th June to Friday 1st July 2016 CCAL opened its new home to the public which included screenings, in collaboration with Frameworks Films, of the films “Meet John Doe” (1941), “Way Out West” (1937) and “Juno” (2007). The building is painted in square blocks inspired by a graphic equalizer.