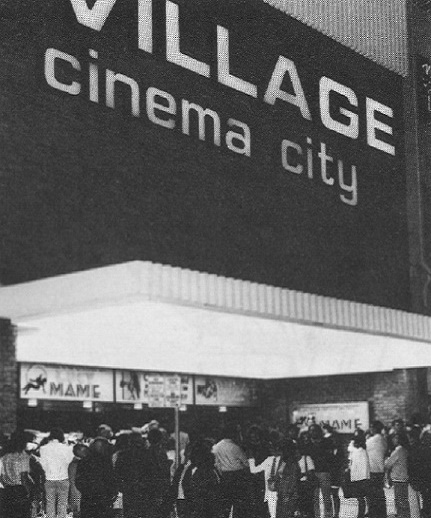 The 3-screen Village Cinema City opened on 25th April 1974 and was designed by architect Ron G. Monsborough. It was the first key city centre multiplex in Sydney, with seating provided for 650, 450 and 300.

Village Cinema City was expanded to five screens premiering “White Line Fever” after the adjoining building on the George Street south west wall was demolished to become two small auditoriums. Cinemas 4 and 5 opened on the 18th March 1976 and had seating for 250 and 200.

A sixth screen was added after the closure of the Village Ascot theatre on Pitt Street, opening on 5th February 1986 on the site of a demolished building off the Village Cinema City north eastern wall on Kent Street.

Village Cinema City closed in 2000 and was demolished for the construction of the Meriton Apartments.

Compiled by Peter Fraser. With thanks to David Coles and Peter Mason for their assistance.

I will put up in a few months Floor Plans and Sections of the 5 Cinema Multiplex as it was in 1976 after i redraw them as i have been advised putting up the originals will breach copyright. Ed

OK. After 4 months in my spare time redrawing the 5 Cinema design the Parent Firm says they still look to close to the Original Plans. So I give up , and hopefully some photos will emerge in the future of this Multiplex. All the Best. Ed