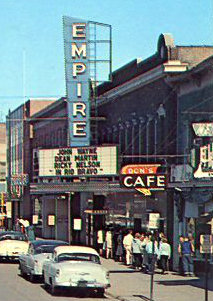 It remained essentially the same until it closed in 1994 and was donated by Midcontinent Theatres to the local arts council in 1995. It was renovated to preserve the flavor of all three of its incarnations (especially its original Baroque and 1930s Deco touches), while reducing the seating to accommodate a newly expanded stage and new orchestra pit.

Currently, it hosts a variety of live stage events, meetings, and some movies (usually presented on 16mm or via video projection, as the theater has not yet been able to afford to acquire 35mm film equipment to replace what was removed when it closed as a first-run movie house).

My earliest memory of this place was seeing “Mary Poppins”, probably around ‘65 or '66. It was one of the few theaters in Grand Forks, and although as a kid it seemed old and musty, when I think back, it was a pretty cool theater – great architecture with interesting ornamentation. Also, I had an accident at this theater in the early 70s, when I walked through a plate glass window in the lobby, after a showwing of the “HR Puffinstuff” movie. Must have been some movie.

Here is an event that took place at the theater in May 2007. I think the name should be changed to Empire Arts Center.
http://tinyurl.com/5z7fsd

According to the finding aid for the Buechner & Orth papers at the University of Minnesota, the firm designed over a dozen theaters. So far, Cinema Treasures attributes only three of these, with separate listings for Charles Buechner and Henry Orth.

The list is on-line, but the UM web site is oddly set up so I can’t find the page the full list is on, only the introductory page. I’ve only seen the actual list in the Google cache of the page, which is a bunch of dismantled text, difficult to decipher. I’m not sure which theaters are already listed at Cinema Treasures, perhaps under later names, and which are missing. Four theaters on the list don’t even have names given. I’m still trying to puzzle it all out. Maybe somebody else will have more luck with it.

A. J. KAVANAGH IS ONE GRAND HUSTLER / Dakota Man Takes Over a Minneapolis Theatre While His New Grand Forks House Is Building

A J. KAVANAGH, exhibitor of Grand Forks and Jamestown, N. D., has taken over the lease of the Southern Theatre, at Seven Corners, in Minneapolis, and will begin the operation of this house July 1. Mr. Kavanagh plans to renovate the theatre and place it in first class condition. He stopped over in Minneapolis recently while en route to North Dakota from Chicago, where he purchased a new $8,000 pipe organ for the new picture house he is building at Grand Forks to replace his old Grand Theatre, which was burned to the ground. Construction of the new theatre is now under way at Grand Forks, and it is to be completed by October 1. The house, which will cost at least $80,000, will have a fifty-five foot front and a depth of one hundred and twenty-five feet. It will be a fireproof, concrete, brick and tile structure, larger than any present picture theatre in the state.