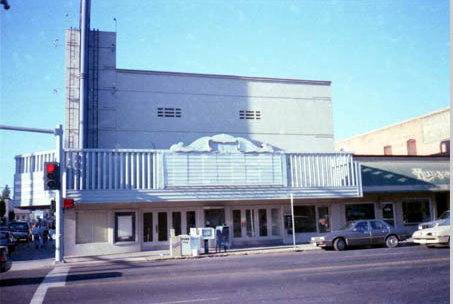 The Huff Theatre was opened on September 9, 1936 with Franchot Tone in “The King Steps Out”. In 1940 it was renamed Wilma Theatre. “I remember this theatre from my youth and saw "Star Wars” there in 1977". It was closed in 1983 with Julie Andrews in “Victor/Victoria” and was demolished in 1997.

The following is from a article in the Coeur d' Alene Press by Robert Singletary dated 2-10-1997.

The theater was built in 1936 at 2nd & Sherman Ave. by Eugene E. Huff, and named the Huff (seated 600). He also owned the Dream Theater (1914-1957) and Liberty (Rex) Theater (1916-1946) also on Sherman Ave..First movie was “ A Midnight Summers Dream” with Spencer Tracy.
The Huff theater was puchased by Edna Wilma Simons in 1940 and renamed the Wilma Theater. Simons Amusement was based in Missoula, Montana.
The Huff/Wilma operated from 1936 to 1983. The last film was “Victor/Victoria.
The theater was demolished in 1997.

The Dream is demolished (it had a large stage and orchestra pit and was used for live theater and stage shows) Seated 800.The Liberty (Rex) is a store and seated 700

From a personal point (changed signs in 1947-48 while in high school). The Wilma had a very plain interior, small balcony, would call it 30s modern design both outside and inside.

The article has various pictures of the Wilma and others, all from Museum of North Idaho in Coeur d' Alene.

In 1981, the owner/operator was W.A. Simons Co, a division of Sharp-Sias Enterprises. Headquarters was in Missoula, MT.