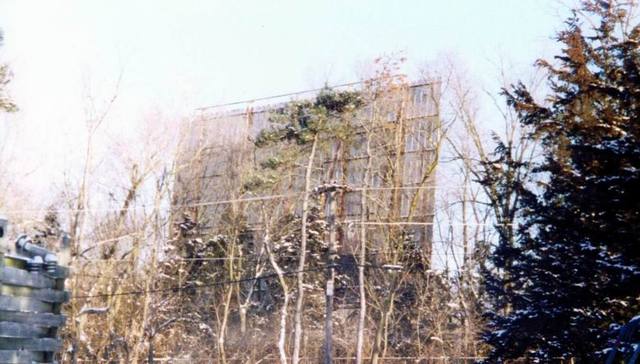 The Crystal Lake Drive-In opened on July 16, 1953 with Randolph Scott in “Hangman’s Knot”. Its name was soon afterward shortened to the Crystal Drive-In. This theater was located on Highway 14 at Pingree Road, in Crystal Lake. It could accomodate about 1,000 cars.

The Crystal Drive-In was still open in May 1977. In 1981, its final year of operating, it went back to its original Crystal Lake Drive-In name. Today, though vandalized and falling apart, the screen tower still stands, though the Crystal’s concession, projection and ticket structures were long ago demolished. The whole former drive-in property is now very heavily overgrown, though surrounded by ever-expanding residential development.

Those were the days.

Does anyone have any pictures of the drive in? I have searched high and wide for any photos, either while it was operational or after it was closed and cant seem to find anything.

A more accurate address for this theater is 7382 Pingree Rd, Crystal Lake, IL 60014. This points directly to the entrance road. Drive In Ln. is next to where the drive in stood.

UPDATE: The Crystal Drive-In Was Renamed Back To Crystal Lake Drive-In Only During Its Last Year In Operation Until It Closed At The End Of The 1981 Season (May To Mid-September) With Rated R Films (A Bit Close For Being X). They Closed The Theater For Good After 2 Fights That Injured 8 People, With One Being On July 11th, 1981.

The First One Is Unknown, But The Second One Is Known. The Second One On July 11th, 1981: McHenry County Sheriff Respond To The Crystal Drive-In After A Fight. The Drive-In Employee Is Knocked Out, And One Of The Workers Was Told to Stop A Movie On The Projector That Happened Around 12:30 AM. Only 8 People Have Minor Injuries (All Between 17-20 Years Old). Crystal Lake Police Said That The Fight Occurred When A Vehicle Struck An Employee At The Parking Row Who Works At The Crystal Drive-In.

Throughout The Late 1970s And Early 1980s, 2 More Incidents Were Reported. A Robbery Occurred At The Crystal Drive-In On July 31st, 1977. And On June 20th, 1979, The Crystal Drive In’s Screen Was Sprayed With Black Paint According To The Manager. That Happened Around 12:30 AM When A Maintained Ladder Had Been Climbed Leading To The Wooden Platform Of The Screen. No Witnesses Or Suspects Have Been Reported At The Time.

On June 28th, 1955, The Crystal Drive-In Installed McHenry County’s Second CinemaScope Screen (The First Being The Miller Theatre In Woodstock On January 28th, 1954).