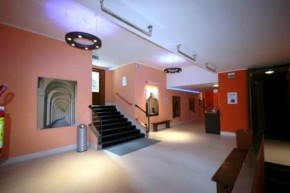 In Bologna, the largest city in the Emilia-Romagna region of Northern Italy, the Cinema-Teatro Galliera presents a mixed programme of film, live productions and concerts.

Very unusually, it is located beneath a church, presumably in the area of the former crypt. (While I was photographing it there was a funeral taking place; fortunately, the entrance to the Galliera is down steps at the side of the church!)

In addition to the main auditorium there is also a small room, used for meetings and classes, that can seat up to 30.

The Cinema Galliera re-opened in May 2016 following an extensive refurbishment.