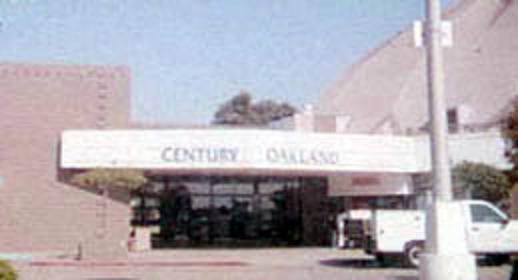 This dome-shaped theater was opened as the Century 21 Theatre October 29, 1968 with Clark Gable in “Gone With the Wind” and was a definite if unofficial landmark off the Hegenberger Road exit off Highway 17 (now I-880).

At some point about the late-1990’s, however, it rather abruptly disappeared.

The Century 21 seated 960 people when it was a single-screen theater. During its construction, a time capsule was reportedly placed within it to be opened on January 1, 2000, the first day of the 21st century for which it was named. (But obviously this one didn’t quite make it; wonder what became of that capsule???????)

Drove by the former site yesterday, and the once-abandoned lot is now under development. The trucks and bulldozers are hard at work on what I hope isn’t another godawful strip mall.

Unfortunately, it appears to be another strip-mall. Good luck.

Former site is now occupied by a Wal-Mart strip mall.

Vincent Raney is the architect of this building.

To bad Ray Syufy got money hungrey and split many of his Domes down the middle. Leaking sound, seats going the wrong way. It was a mess. At least he didn’t split the flagship The Century 21 in San Jose.

This was actually an 8-plex when it closed and was called simply Century 8 Oakland. Century 21 & 22 should be an AKA.

1968 grand opening removed for inferior quality reasons and replaced with a better one as well as the April 4th, 1973, ad.