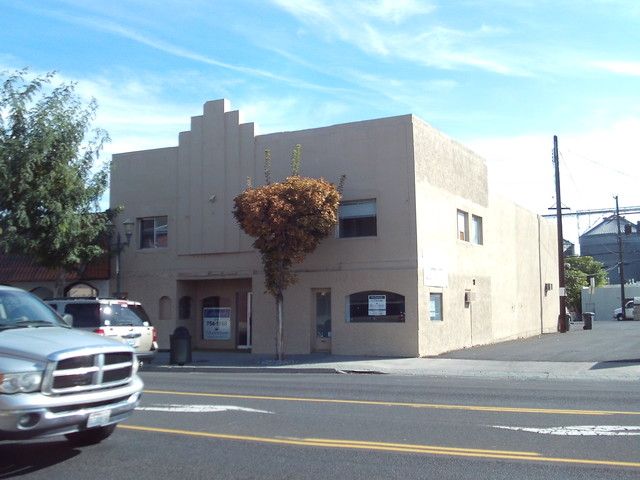 While on a trip to the small town of Ephrata in the high desert of Eastern Washington State, I came across an empty building that could not have been anything else than a theater. A little research at the local Grant County Historical Society put me in contact with Mr. Julian Arganoff, age 90, who worked there and at several other area theaters as a projectionist in the 1950’s. He was able to tell me that the MarJo Theatre name was a contraction of the owner’s first names, Mary and John Lee.

The MarJo Theatre was opened in 1940 until some time after 1955. It is listed in the 1955 City Directory as open but is gone by the 1963 edition. The Lee family ran 8 or 10 small town theatres (including the Lee Theatre just down the street) in Central Washington from the 1920’s until the circuit was sold in about 1956.

The latter part of this PDF has an article about the history of Ephrara’s theaters, with information from an interview with Mary Lee, who started the Lee circuit with her husband John in 1936. The article says that the Marjo (they don’t hyphenate it) Theatre opened in 1940.

The Lees' first venture into the business was taking over an older theater called the Kam in 1936. They renamed the house the Capital (this is the spelling used in the article. “Capitol” is used far more frequently for theaters.)

The article is accompanied by a few photos, one of which depicts the Marjo, and two of which are of the Lee Theatre, which John and Mary opened in 1952.

The 1914-15 edition of The American Motion Picture Directory lists a theater at Ephrata called the Kaminski Opera House. I think it might have been the theater that was later called the Kam which the Lees renamed the Capital.

I found an recent but expired real estate listing for the MarJo, $99,900 asking price.

This item is from the March 4, 1939 issue of Motion Picture Herald:

“John Lee has started construction of a motion picture theatre at Ephrata, Wash., 20 miles from the site of the Grand Coulee Dam. The house, which is to cost $20,000, will accommodate 350. Mr. Lee has theatres at Soap Lake, Quincy and Neppel, Wash., and at present is operating a theatre in the Ephrata locality.”