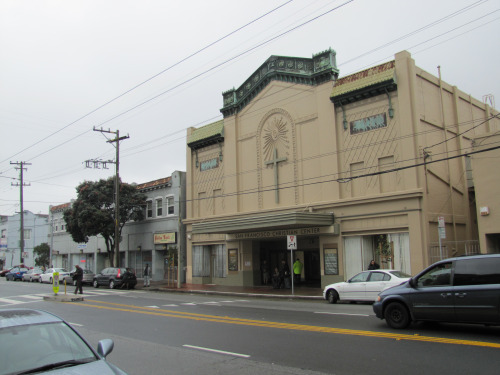 Anyone driving past the San Francisco Revival Center on outer Mission Street, is immediately struck by the fact that it MUST have been a theater once, but nobody seems to know anything about it!

It opened around 1925, as the State Theater (no relation to the better known State Theatre, former California Theatre, downtown at 4th Street and Market Street.) It was a medium sized, stadium type house, even with its own roof sign!), much like the nearby Amazon Theatre/Apollo Theatre, (q.v.), a few blocks to the North, on Geneva Avenue, which opened in September 1928.

In December 1928, the Daly City Theatre, also on Mission Street, a few blocks to the South, opened up, an outrageous example of over-building at a time when the neighborhood was still rather sparsely inhabited. It is no surprise then, that the State Theater, located at the midpoint between the other two, closed in 1931, apparently permanently.

What is a surprise, then, that it re-opened on December 5, 1947 as the Del Mar Theater with Douglas Fairbanks Jr in “The Corsican Brothers” & Victor McLaglen in “South of Pago Pago”. It operated for less than three years with late run and re-issue programming; it finally did close, permanently this time, on October 23, 1950, but was soon taken over by a religious organization and turned into the San Francisco Revival Center, and as such continues to exist today.

It retains much of its original facade, and even the interior is little changed from its Del Mar Theater days of more than half a century ago.

The architect was Mark T. Jorgensen.

The facade is nearly identical to that of Jorgensen’s Parkway in Oakland. Though the Parkway still operates as a movie theatre, the facade of the State/Del Mar is actually the better preserved of the two.

The interiors were designed quite diferently, however. The State/Del Mar can be best described as conservative Neo-Classical, whereas the Parkway is Egyptian Revival with a proscenium and organ grille which borrow much of their look from the Metropolitan/Paramount in LA and the Egyptian in Hollywood.

In 2004 the city gave conditional approval to add on to the original structure:

5825-5845 MISSION STREET, 50-68 OLIVER STREET & 846-848 BRUNSWICK STREET (aka SAN FRANCISCO CHRISTIAN CENTER) Lots 2,3,5,14,15,27 Assessor’s Block 6472 – Request for conditional use authorization to amend a Planned Unit Development previously authorized by the Planning Commission under Motion No. 16517. The proposal includes the construction of a three-story 4,550 square-foot horizontal addition to the rear of the existing church building located at 5825 Mission Street. This amendment requires conditional use findings for non-residential use size over 4,000 square feet for the proposed addition to the church building pursuant to Planning Code Sections 711.21, 121.2 & 303© . Lots 2 & 27 of the project site are located in an NC-2 (Small-Scale Neighborhood Commercial) District, and lots 3,5,14 & 15 are located in an RH-1 (Residential House, One-family) District. The entire site lies in a 40-X Height and Bulk District.

I was born in 1944. I grew up within walking distance of the Del Mar. My sister was an usherette but I still had to pay full admission price. Several, several years later I did visit what became a gospel center. Many good memories of the Del Mar.