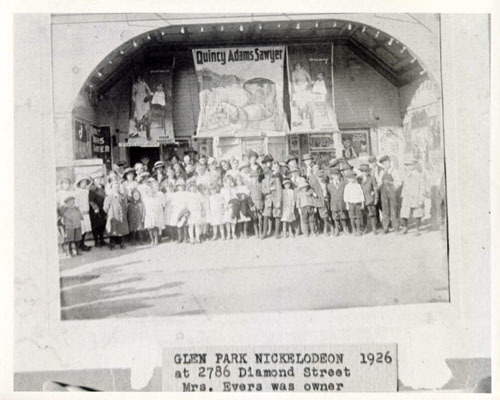 Opened as the Glenodeon in 1913. It was a small, typical neighborhood nickelodeon that served San Francisco’s Glen Park neighborhood. It was renamed the Diamond Theatre in 1917 and closed around 1929 or 1930, never adapting to the advent of sound.

Unlike other similar ventures elsewhere in the city, it was never replaced by a larger theatre, and is completely forgotten today, except for a single faded photo that survives in the San Francisco Public Library History Room showing a small but gleeful audience gathered together underneath its humble arched façade one bright day back in 1926, the film of the moment being the equally forgotten “Quincy Adams Sawyer”.

According the IMVB, Quincy Adams Saywer was a series of stories about amateur detectives set in a small town in Massachusettes.

Of interest is the 1912 silent version of the 2 films. The 1912 version starred Lon Chaney.

this theater’s fate is similar to many smaller neighborhood theaters around NYC. they were state of the art when they first opened in the early 1910s but were outdated by the time sound films made their mark.