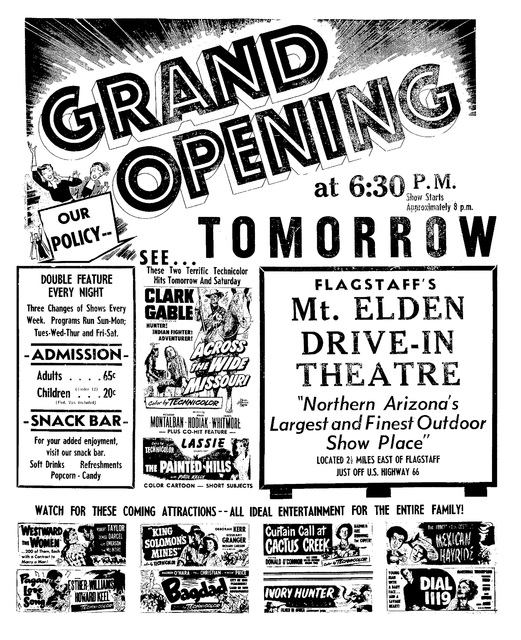 The Mount Eldon Drive-In was opened May 29, 1953 with Clark Gable in “Across the Wide Missouri” and Lassie in “The Painted Hills”. It was operated by Northern Arizona Theatres & Harry L. Nace Ct. Ltd. It was closed on October 9, 1977 with Ron Howard in “"Eat My Dust” & “Thunder and David Carradine in Lightning”. Now the U.S. Post Office. The rental car business in front of this post office its parking lot was where the entrance was located.

Better quality ad when clicked on: 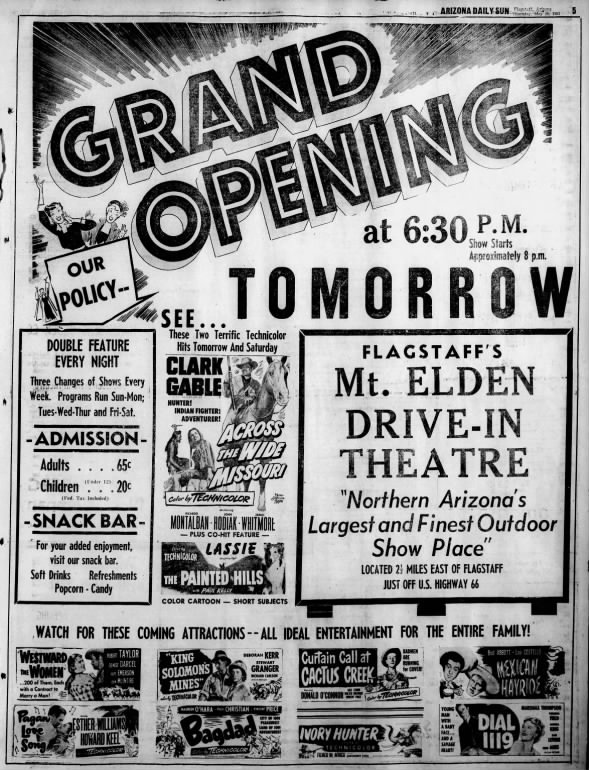 According to Historic Aerials, the screen faced east to an unusually rectangular field. It was still there in 1980, but the whole lot had been taken over by the USPS by 1997. Topo maps listed it in 1965-76, then gone in 1983.

“(25 Years Ago in the Sun) … Harry Nace and Ray Olmstead have begun construction of the area’s first drive-in type theater, Guy Ellis, manager of Northern Arizona Theaters Inc., which will operate the establishment, said today.”

The Mt. Elden advertised in the Daily Sun through at least October 1977. A January 1978 police blotter note mentioned vandalism there, but by May 1978 it was being referred to as the “now-defunct” Mt. Elden Drive-In Theater.

Hmm, the Mt. Elden was three miles east of downtown Flagstaff. Boxoffice, Oct. 20, 1951: “FLAGSTAFF, ARIZ. – Construction has been started on a 500-car drive-in five miles east of here. It will be operated by Harry L. Nace and Ray Olmstead, representing Northern Arizona Theatres.”