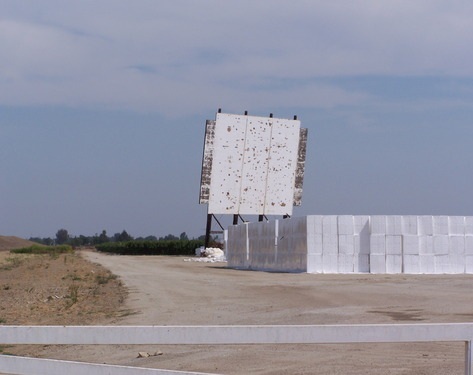 The Del-Mac Drive-In was opened in July, 1950 when it was operated by Panero Theatre Company. Now La Jolla Cold Storage. The screen is still on the property in the back.

Boxoffice, March 11, 1950: “DELANO, CALIF. – Frank and August Panero, owners of the new drive-in slated to open here March 15, plan to erect other ozoners in Selma and Shafter, Calif. The Paneros head the Valley Drive-In Theatre Co., Delano. Capacity of the local drive-in is 520 cars, while the Selma and Shafter open-airers will have capacities of 320. Total building cost is estimated at $160,000. Shafter and Delano are in Kern county, while Selma is in Fresno county.”

Boxoffice, Aug. 5, 1950: “DELANO, CALIF. – The new Del-Mac Drive-In about one mile south of here on Route 99, has been opened by Frank Panero and his two sons August and Ernest. Located on a 20-acre tract between Delano and McFarland, the Del-Mac has accommodations for 440 cars. The screen tower is 78 feet high, and it supports 44x60-feet scree. The Paneros will open another new drive-in near Shafter before the end of August. Jim Stephenson of Delano is manager of the Del-Mac ozoner.”

Boxoffice, March 10, 1951: “Kirby H. Bezzo has been appointed manager of the McFarland Theatre, to succeed Cal Boggus who has taken over the management of the Del-Ma Drive-In, between (McFarland) and Delano.”