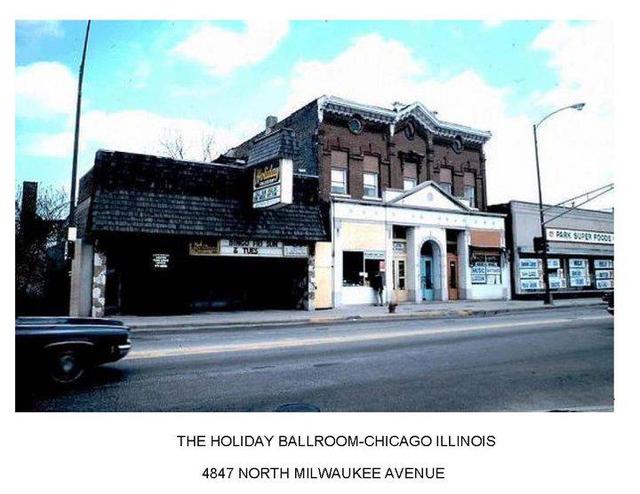 This small theatre opened on December 25, 1936 in the Jefferson Park neighborhood (not far from Jefferson Park itself) near the intersection of N. Milwaukee Avenue and W. Higgins Avenue.

It played mainly second-and-third run fare, and often had theme days, such as all Western or mystery films.

The Times Theatre appears to have closed in 1954. The building later housed a nightclub, but this, too, closed. In the 1980’s, the entire block that the former theatre was located on was razed to make way for a strip mall and bus terminal.

Here is a 1982 photo. Not sure about the art deco, but I suppose that was before the remodel into the dance place.
http://tinyurl.com/c7an78

Another theatre in the Jefferson Park area was Jeff. It was located on Milwaukee Ave. about two blocks south of Lawrence. As I recall it was a run down dump.

The Rock dances continued into the late 70’s.

The Building was owned and operated by Dan Belloc, former band leader and music & record promoter. His name appears on many hit songs including ‘ PRETEND ’ by Nat King Cole.

It was NOT a nostalgia concert although they did play a few of their 1940’s hits. The orchestra mainly performed their current style which consisted of Jazz & Jazz Rock – with some 1970’s pop hits of the day ( Jazzman, Alone Again Naturally, Superstar, Where is the Love ) etc. While a few probably tried to dance, it was more of a concert and most everyone just stood on the dance floor listening.

When the Embassy Ballroom sold and ran their official last on Sept 27, 1981, their regular Big Band Dancers were informed the dances would continue at The Holiday Balloom.

Those dances continued until the late 80’s when the ballroom was raised for the New – Jefferson Park terminal expansion.

Here is a THSA photo of the art deco front of the Times.

it was in the ‘80s—not the '70s as stated in the theatre overview—the razing of the times theatre & adjacent bldgs. for the strip mall. The neat THSA photo showing Leonard Seed store right next door reminded me that I shopped there myself in the early '80s, when it was a handyman fix-it shop. Also there was a Foot-So-Port shoe store there too I liked (they re-located to by the portage theatre in subsequent years)

This opened on December 25th, 1936. Its grand opening ad is in the photo section.