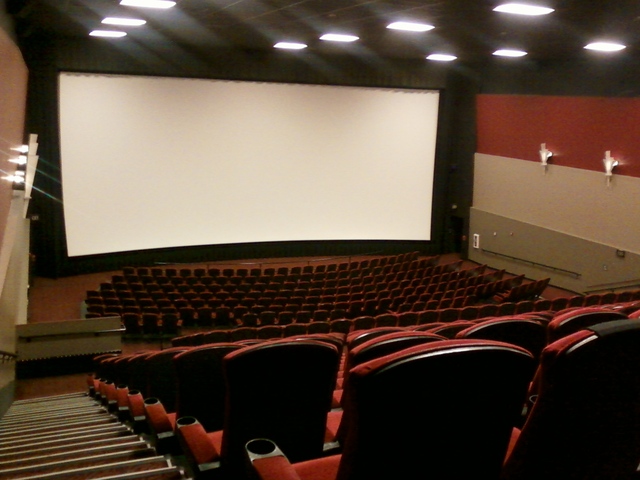 The AMC Neshaminy 24 Theatres opened September 18, 1998 at the Neshaminy Mall in the Philadelphia suburbs as one of two theatres with this design, the other being in Spain. Costing $11 million to construct, when it opened it was the largest multiplex movie theatre in Pennsylvania.

This state-of-the-art megaplex has 24 stadium seating theaters with digital surround sound. At the main entry to the mall, are the four largest auditoriums. Originally auditoriums 1 and 24 had about 600 seats and 61 feet wide screens. Auditorium 1 was redone and reopened in August 2008 as a digital IMAX theatre with 529 seats. Auditoriums 2 and 23 have about 400 seats and huge screens. Auditoriums 7 thru 18have fairly large screens. The smallest auditoriums, with about 100 or fewer seats are 3 to 6 and 19 to 22. In 2007, the theatre’s first digital projection arrived for the movie “Zodiac”. As of April 2011, about half the auditoriums had been converted to digital projection.

3 concession stands serve patrons, as the two Metros are located by auditoriums # 1, 2, 23 and 24, and the Uptown is located by auditoriums 7 to 18. When all three concession stands are open, they can serve 2,500 people an hour. This theater replaced a previous AMC Theatre in the mall, the AMC Premier Twin Theatre, which was closed in around 1992/1993. The nearest movie theatres are at Oxford Valley and Franklin Mills.

This theater has been voted by the people of Bucks county (via the Bucks County Courier Times) to be the best theater in the county from 1999 thru 2005. It has been one of the most busiest and profitable movie theatres in the nation since it opened. The IMAX with laser screen reopened on November 11, 2022 screening “Black Panther Wakanda Forever”.

There is new exterior signage on the former Sears side that is “Dolby Cinema” and “IMAX” with “AMC” above it. The Boscov’s dide and back of theatre still has “AMC 24” signage.

There is new Blue interior lights in the Dolby Cinema. There are pic in the picture section.

I just read that the IMAX at the UA King of Prussia is getting dual 4K Laser Projection. I wonder if there are any plans to upgrade the IMAX at the Neshaminy to 4K Laser?

AVOID the AMC Neshaminy Dolby Cinema. Of the four Dolby Cinemas in the Philly metro area, this is easily the largest. Common height screen and good Atmos (though not as good as the new common width Fashion District Dolby). Unfortunately they RUIN the Dolby Cinema experience by making the signature blue Dolby light too bright and keeping most of the house lights on during the ENTIRE FILM. Repeated requests to management and Dolby/AMC representatives to fix this have yielded no improvements. It is obviously not a safety or regulation issue as the IMAX auditorium with tiered Dolby seating at the same theater is kept appropriately dark. Until this is resolved, I recommend paying for a NJ tier membership and going to the common height Dolby at Cherry Hill. It’s not quite as large BUT it is lit properly. I have added a photo to the photo section for illustrative purposes but bear in mind that it only shows a fraction of the problem. There are many more lights left on as you move toward the back of the auditorium.

Hmm….my experiences with the Dolby Cinema have been very positive (except for a showing of Thor Ragnarok where one of the projectors went down with about a half hour to go in the film; we were able to see the rest of the film, but the picture quality really suffered but they did give everyone free passes and let us know what was going on at least). Don’t recall any issues with the house lights, etc. I do like the fact that Neshaminy has the 2.39 to 1 common height screen (unfortunately no side masking for 1.85 to 1). It’s been a little while since I was in the Neshaminy IMAX but I have seen films there since the renovations. Anybody know if they have converted the IMAX from the dual 2K Zenon projectors to the new IMAX single 4K Laser Projection or better yet to the Dual 4K Laser or if there are any plans to do so?

Neshaminy IMAX has tiered Dolby recliner seating but no Laser projection. Saw Parasite at an IMAX Laser and then at Neshaminy and the Neshaminy showing looked utterly pedestrian by comparison. As for Dolby Cinema at Neshaminy, I was impressed when I first started going (it’s very big and I have no complaints regarding the Atmos sound) but even then I thought it looked dim and a bit washed out compared to standard IMAX showings I’d see at other theaters. Only after attending several other Dolby Cinemas in the area did I realize how poor the lighting is in the auditorium and that it was negatively impacting the screen. Even the standard theaters at AMC Fashion District are superior to the AMC Neshaminy Dolby Cinema.

I read that starting in 2018 they were starting a rollout to convert 85 IMAX theaters in the USA to 4K Laser Projection. I’m hoping that the Neshaminy 24 is one of them. IMO it would seem like the Neshaminy would be a natural choice for 4K Laser as it’s one of the larger Digital IMAX theaters and has a nice big screen as Digital IMAXs go plus the Neshaminy 24 is apparently one of the highest grossing megaplexes in the US. With the way technology is moving forward, I wonder how soon other companies like Barco, Sony and Christy will start rolling out their own 4K projectors in regular auditoriums? I have read that the new THX Ultimate Cinema may even surpass Dolby Cinema in sound and picture quality.

The only AMC’s in the Philadelphia/South & Central area that received Laser IMAX we’re: Cherry Hill 24, Hamilton 24 (since Closed), and New Brunswick 18

As of October 3, 2022, the IMAX Theatre is being renovated to become a Laser IMAX Theatre. It is slated to be open in time for Avatar: Way Of The Water

As of November 11, 2022, the IMAX Theatre reopened as a “IMAX with Laser st AMC” Theatre, with “Black Panther Wakanda Forever” in Laser IMAX and Laser IMAX 3D.