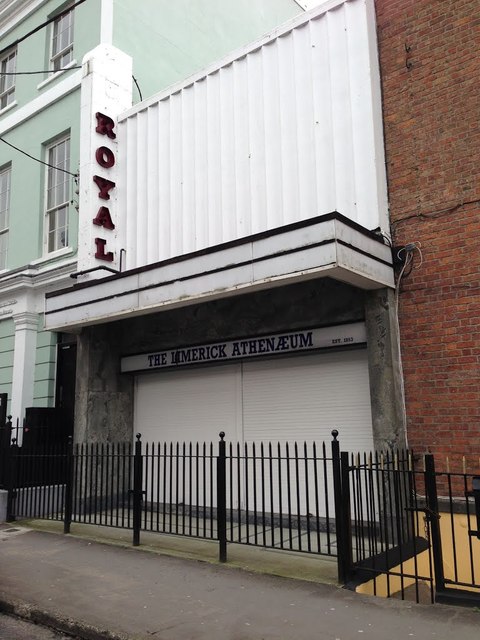 Began life as the Athenaeum Hall in 1856 and was showing pictures in the 1910’s as the Athenaeum Permanent Picturedrome. Western Electric(WE) sound was installed in 1930 and the lease of the cinema was given up in 1941 resulting in only occasional screenings until 1946 when it closed.

It was reconstructed and reopened as the Royal Cinema on 17th November 1947 by the Breen Group headed by Mrs Mamie Collins. The first film shown in the 600-seater was Cary Grant in “Night and Day”. In the 1960’s it was acquired by the Green Group, director Paul Anderson, and closed as a cinema on 26th September 1985 when the last film to be screened was “Police Academy II”. Falling attendances was given as the reason.

It was reopened as a music venue by Seamus Flynn in 1989 but was gutted by fire on 6th March 1990. It reopened the following year when Mary Black and the Cranberries were among the guests gracing the stage. It eventually closed in 1998. Plans to create a new venue have surfaced periodically since 2010 but so far no signs of reopening.