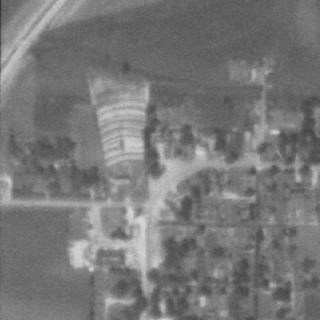 The Pontiac Drive-In was opened in July 1949 with a 100 car capacity. By 1955 it was operated by Ken Phillips and had been enlarged to 275 cars. In 1958 it was sold to Kerasotes Theatres and was renamed Star-Chief Drive-In. It was closed in September 1981 with “The Empire Strikes Back” & “Windwalker”. Now an empty lot with containers.

My guess is that the Pontiac became the Star Chief, possibly after changing hands or being enlarged. What are two Cinema Treasures listings as of this writing should merge under the Star Chief.

That’s probably the same Ken Phillips who sold the Star Chief to Kerasotes Theatres in 1958.

The Pontiac was in the first Motion Picture Almanac list in the 1950-51 edition, showing a capacity of just 100, owner Martin Murray. Then came a period of overlap where the ever-fallible MPA listed the tiny Pontiac next to an improbably same-named drive-in with the same capacity as the later Star Chief.

(Of course, we have excellent evidence that the Star Chief ceased operations after the 1981 season.)

This might be the transaction that led to the renaming. From the April 17, 1954 Motion Picture Herald: T.E. Lally has sold the Pontiac drive-in, Pontiac, Ill., to L. Hewitt of Manito, Ill., because of illness.

PONTIAC, ILL. – A drive-in is under construction at the intersection of Route 23 and old Route 66. It is expected to open the last part of this month with Ken and Mart Murray of Bloomington in charge.