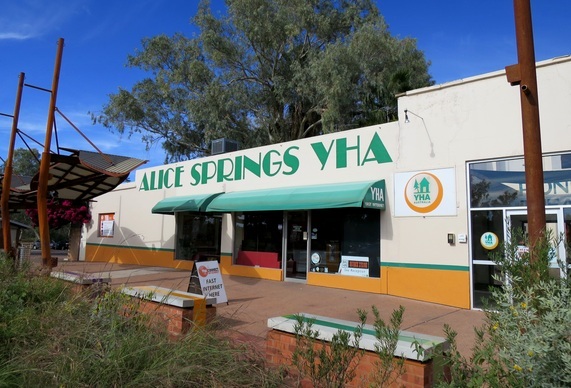 The theatre building was then converted in a YHA(Youth Hostel Association) Hostel(Alice Springs YHA), opening on 13th June 1990. The Alice Springs Youth Hostel has a few seats in the open air in whats left of the grounds of the old Pioneer Theatre and runs occasional movies.

Greg Lynch says : The Pioneer Walk-In (Open Air) Theatre, Alice Springs, was purpose built by Snow Kenna in 1941. Leslie Joseph (Snow) Kenna began showing movies in the old Welfare Hall together with Bill Burton, until well known business identity Ly Underdown recognizing the possibility of this modern entertainment, erected his Capitol Open Air Theatre, into which he installed Snow and his projection plant. Bill Burton moved on to Tennant Creek to open a show there. In 1939 Snow decided to build his own theatre…By now his bank balance had allowed him to purchase a block of land in Parsons Street where he was to fulfill the life long dream of running his own cinema. Snow named it The Pioneer Walk-In (Open- Air) Theatre & Cafe. Previous experience in the area regarding climate conditions had taught Snow a lot, and he was careful to place the screen south to avoid the remnants of the late noon sun & the changing position of the moon. The new Open-Air Theatre opened with much acclaim in 1942. A major highlight for the Kenna family was the world premiere of the movie “A Town like Alice” held on 24th July 1956, with the the stars of the film Peter Finch and Virgina McKenna attending in person. The occasion was also used to raise funds for the Royal Flying Doctor Service. Locals arrived in casual dress, carrying thick rugs and cushions for the open-air screening. The theatre was decorated with bunting and palm leaves for the night. Peter Finch invited Beryl Oliver, the air hostess on his flight, to be his guest on the night. The two sat together, smoking throughout the screening. Nevil Shute and his wife also attended. By 1958 Snow realized that it was time to go Big Screen. With much excitement the screen was doubled in size and Snowy purchased a set of the new anamorphic lens technology that was necessary to screen CinemaScope movies. Once converted he was able to catch up with the Scope blockbusters he had missed, such as “The Robe” & “Three Coins in the Fountain”. Business flourished as the screen got bigger. In 1963 the theatre was refurbished and the facade improved. Come 1965 and with much foresight, Snowy opened the Pioneer Drive-In Theatre, this had the unfortunate result of reducing attendance’s at the Pioneer Walk-In, as picture goers changed their habits in favor of watching movies in the family car. Seven months after the opening of the drive-in Snow Kenna died, leaving his family to carry on. In 1983 the Kenna family sold both theatres to Greater Union Theatres, who ran the walk-in till 1984, and the drive-in until 1987. Later the walk-in was purchased by Big Print P/L and leased out as the Pioneer Market. In 1988 Youth Hostels of Aust purchased the old walk-in theatre and opened two years later as a hostel. Happily the hostel has continued to preserve the legend of The Pioneer Walk-In – Here is an extract from their latest advertising – Quote – “Alice Springs YHA is built within the grounds of an historic outdoor movie theatre, in a great location in the center of this atmospheric outback town. Our hostel has a big outdoor movie screen showing movies nightly under the stars”.– End quote – BRAVO ! – Acknowledgments Pam Hodges: – “Alice Springs Past & Present” by Shirley Brown 1993 / The Film Journal International / The ABC News / Woman’s Weekly / Charlie Poole –

There was plans to open a museum in the building about the history of the building, but so far, nothing has happened.