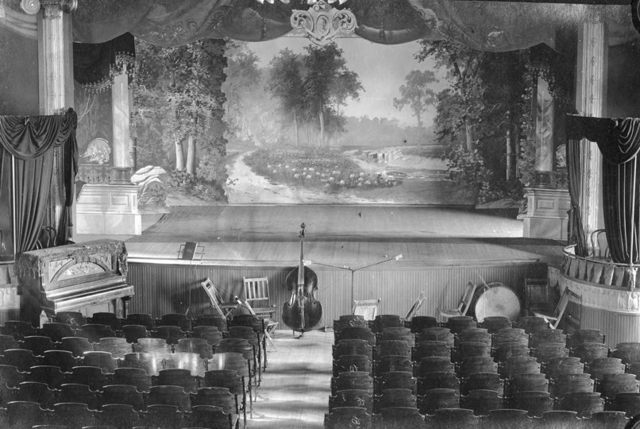 Built in 1869 by Robert M. Layson. Known as Layson Hall, the building was used as a furniture store in the lower level and in the second floor as an opera house for the public. Opening night was December 10, 1871. In November 1904, the property was sold to Ben Pemberton and W. Morris Goff, the theater was renovated and the name changed to Crescent Theater. By 1906 it was showing movies along with vaudeville. In 1907, the name was changed again to New Electric Theater.

After the building stopped being used as an opera house and theater, the second floor was used as apartments and the first floor was designed retail space.

It would be interesting to know if this house was still in operation in 1916, when the September 16 issue of The Moving Picture World published this item about the likely fate of Shelbyville’s upper-floor theaters:

“Shelbyville, Ky.—From present indications it looks very much as though Brown’s theater, formerly operated by the late R. M. Brown, will shortly be closed. Following the recent death of Mr. Brown the executors, who had announced that the theater would be sold at public auction, leased the theater to Ivory Ethington for one year, with the privilege of seven additional years. At a meeting of the city council a few nights later a committee composed of City Attorney Barrickman and Councilmen B. A. Logan and W. A. McGrath, was appointed to prepare an ordinance which shall prevent the establishment or operation of moving picture theaters excepting on the first floor. The Brown theater is on the second floor and may have to take up quarters elsewhere.”The same issue of the magazine mentioned a house at Shelbyville called the Music Hall, but with no details. The opera house might have been one or the other of those theaters.

The August 21, 1915, issue of MPW also mentioned Brown’s Theatre, along with a new Shelbyville house called the Green Dragon Theatre. Shelbyville also once had houses called the Majestic Theatre and the Strand Theatre.