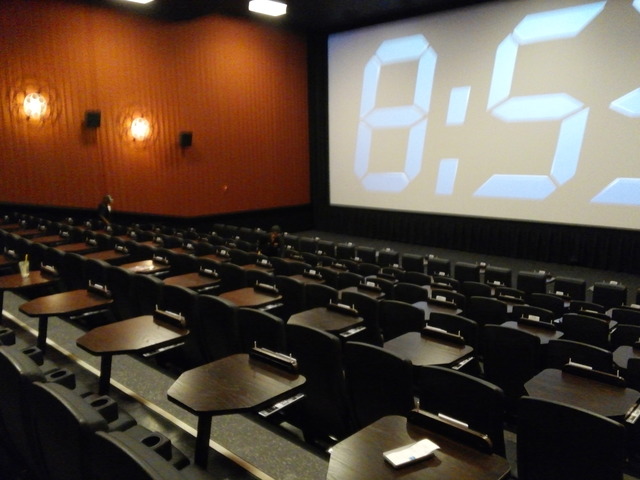 After a failed attempt to renovate the Metro Theatre on Manhattan’s Upper West Side, Alamo Drafthouse finally makes their long-awaited New York City debut at Downtown Brooklyn’s City Point, an up-and-coming residential-retail complex, built on the rear portion of the site of the RKO Albee Theatre. The theatre made its soft opening on October 21st, 2016, and made its official opening on October 28th.

Alamo’s signature in-theatre dining and customized pre-shows are integral to the Alamo Drafthouse moviegoing experience, and this location bears no different. All 7 screens are equipped with Sony 4K projectors and QSC sound systems. Theater 1 is also equipped for 35mm screenings and Theatre 7 is equipped for 70mm presentations.

Apparently those rumors are going to substantiate! 16 screens total! Wild!

QUESTION Saw Joker in 70MM at the Alamo Drafhouse Downtown Brooklyn. I notice the film was in flat, I thought all 70MM films are widescreen (scope). The sound sounded like 70MM 6 track.

Films like ET or Back To The Future which were FLAT films, did they look like they were FLAT in 70MM or widescreen.

All 70mm films are NOT scope! The Joker is flat, as was for example, The Master.

Also, you may be interested in knowing that ‘scope 70mm aspect ratio traditionally is 2.2 wide rather than usual scope (2.35 or 2.39) to accommodate the surround sound that used to be on the film itself. And, “The Joker” was filmed with digital cameras, not 65mm cameras, or 35mm cameras (for blow up to 70mm).

I haven’t seen a screen showing the time before(wow!!)!!

Alamo Drafthouse Brooklyn closed March 16, 2020 for the COVID-19 pandemic. Half of the circuit’s locations opened briefly later in the year excluding its Brooklyn theater. Alamo Drafthouse would file for bankruptcy on March 2, 2021. The company re-emerged from bankruptcy a month later after the takeover of the company by Fortress Investment Group,. The Brooklyn location then reopened on May 7, 2021 becoming the second theater in the Circuit to reopen for the circuit that year preceded only by its Springfield, Missouri venue.

Are they still expanding to 14 screens, only 7 open last Friday. Very disappointed they are closed on Tuesday and Wednesday.

It’s difficult to keep all screens operating 7 days a week with so few major releases in the COVID-19 pandemic environment. I’d look for reduced staffs and fewer screens in usage at the Alamo locations until the major releases come later in 2021.

Also remember that when Cinemascope was first released in 1953, it had 4-track mag soundtracks only and the original aspect ratio was 2.55:1. It was reduced to 2.35:1 to also accomodate a mono optical sound track, which the theater owners demanded.

One of the first films to use 2.35 was “Love Me Tender” with Elvis Presley, released in 1956. (To accommodate digital sound and because lab splices were visible on the screen, the entire image was made slightly smaller and the AR became slightly wider at 2.39:1 in later years. In digital, it’s generally 2.4:1.)

Starting in 1986, a few 70mm films WERE released in 2.35 which was accomplished by simply reducing the height. This way, the sides didn’t have to be cropped as they were with most 35mm anamorphic to 70mm spherical blowups. Those films were: Star Trek IV (1986), The Untouchables, Casualties of War and Die Hard 2 (the last two are unconfirmed.) IMO, they should have been doing this all along and it was actually a recommended practice as published in the American Cinematographers Manual, I believe beginning in the 6th edition, published in 1986.