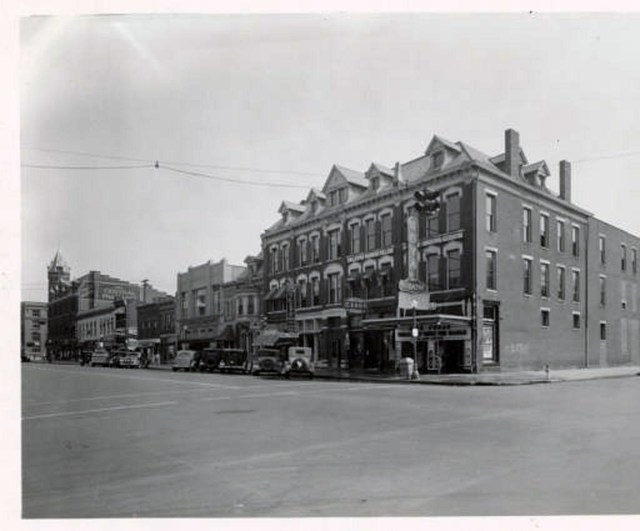 Opened on April 12, 1906 as the Orphium Theatre, staging vaudeville. It was operated by the Ohio based Orphium Theatres circuit. It was closed on September 7, 1912. On September 21, 1912 it reopened as a movie theatre, and was renamed Royal Theatre. It was still open in 1957. Following a refurbishment in 1964 it was renamed Adena Theatre from September 24, 1964. It was closed on November 8, 1986 with Terence Stamp in “Link”. It was converted into a movie theatre/restaurant named Renick’s Backstage which had a short lifespan.

RE address: there is no 3rd Street in Chillicothe (it was displaced by Main Street.) The Orpheum was at the NE corner of Paint and 4th Street.

Opened as Royal on November 25th, 1912. First ad in the photo section.

Circa 1920 photo and description added courtesy of Mark Howell.

A photo from around 1920 of the Schilder Building at Chillicothe, Ohio in Ross Co. Sitting on the NE corner of Paint and 4th Street, it housed the Orpheum Theatre, then the Royal Theater, and then the Adena Theater. A confectionery store can be seen at the middle on the first floor where the Ice Cream, Candy sign is. The theater portion of this building is currently undergoing construction.

This venue launched April 12, 1906 as the Orphium Theater. It was part of the Ohio-based Orphium Theatre Circuit of vaudeville that consummated mostly five-year deals with theatres in Ohio including the Ohio locations of Chillicothe, Lorrain, Bucyrus, Alliance, Xenia, Lima, Portsmouth and Sidney along with two Indiana venues located in Plymouth and Columbus. The Orphium of Chillicothe opened with Baby Irma Kirkhoff in “"Morning, Noon and Night” on the stage along with the Dancing Downs (aka the “King of Clogs”), Wiley-Ferris (the Irish-Japanese jugglers), Will Williams with illustrated songs, and Orphiumscope motion pictures. The Orphium Circuit promised female-centered programming good for kids and the entire family but bookings stopped in 1911 and the company was dissolved likely in 1912. The Chillicothe Orphium closed on September 7, 1912.

The venue was taken over by J.E. Beresford relaunching as the Royal Theatre - a venue where you could get a ten cent movie program for a nickel - after a refresh. That new name was part of a naming contest won by local resident Mary Burke. The Royal was a full-time movie house launching September 21, 1912 with Alice Joyce in “A Celebrated Case” supported by Bison Pictures' “The Arizona Land Swindle” shot at the 101 Ranch. The Royal wired for sound to continue flourishing.

In 1964, the Royal was refurbished becoming the Adena Theatre. It launched on september 24, 1964 with “Richard Burton’s Hamlet” presented in Electronovision. The Adena was one of just 100 theaters to present the Electronovision production, a high-resolution videotape process created by Horace William “Bill” Sargent Jr. for videotaping live performances for theatrical exhibition. The Adena showed more traditional films during its run before closing November 8, 1986 with the movie “Link.”

In 1991, much of its ephemeral material dating back decades along with all of its other contents were auctioned off as Renick’s Restaurant moved into a portion of the facility with the marquee removed. In 1998, the theatre had a short-lived run as Renick’s Backstage with the restaurant featuring a movie and dinner concept. It should also be known as Renick’s Backstage as well as the Orphium Theatre and Orphium Family Theater both with “i’s in their name.